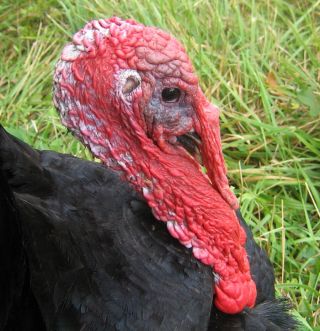 Sarah Yang is a public information officer at the University of California, Berkeley. This article was adapted from a piece on the Berkeley website. She contributed this article to LiveScience's Expert Voices: Op-Ed & Insights.

Some may think of turkeys as good for just lunch meat and holiday meals, but bioengineers at the University of California, Berkeley (UC Berkeley) saw inspiration in the birds for a new type of biosensor that changes color when exposed to chemical vapors. This feature makes the sensors valuable detectors of toxins or airborne pathogens.

Turkey skin, it turns out, can shift from red to blue to white, thanks to bundles of collagen that are interspersed with a dense array of blood vessels. It is this color-shifting characteristic that gives turkeys the name "seven-faced birds" in Korean and Japanese.

The researchers said that the spacing between the collagen fibers changes when the blood vessels swell or contract, depending on whether the bird is excited or angry. The amount of swelling changes the way light waves are scattered and, in turn, alters the colors people see on the bird's head.

"In our lab, we study how light is generated and changes in nature, and then we use what we learn to engineer novel devices," said Lee, who is also a faculty scientist at the Lawrence Berkeley National Laboratory.

The researchers created a mobile app, the iColour Analyser, to show that a smartphone photo of the sensor's color bands could be used to help identify chemicals of interest, such as vapor of the explosive TNT. They described their experiments in a study published today (Jan. 21) in the journal Nature Communications.

Sensors that give off color readings are easier to use and read than conventional biosensors. However, the major color-based sensors in development elsewhere can only detect a limited range of chemicals and, the researchers said, can be very difficult to manufacture.

"Our system is convenient, and it is cheap to make," Lee said. "We also showed that this technology can be adapted so that smartphones can help analyze the color fingerprint of the target chemical. In the future, we could potentially use this same technology to create a breath test to detect cancer and other diseases."

In copying this turkey-skin design, Lee and his team employed a technique to mimic nanostructures like collagen fibers. The researchers found a way to get M13 bacteriophages, benign viruses with a shape that closely resembles collagen fibers, to self-assemble into patterns that could be easily fine-tuned.

The researchers found that, like collagen fibers, these phage-bundled nanostructures expanded and contracted, resulting in color changes. The exact mechanism behind the shrinking or expanding phage bundles is still unclear, but it's possible that the small amount of water in the phage is reacting to the chemical vapors, the researchers said.

The turkey-inspired biosensors were exposed to a range of volatile organic compounds, including hexane, isopropyl alcohol and methanol, as well as TNT, at concentrations of 300 parts per billion. The researchers found that the viruses swelled rapidly, resulting in specific color patterns that served as "fingerprints" to distinguish the different chemicals tested. [San Diego Zoo Opens Center for Animal-Inspired Tech ]

The researchers showed that they could coax the biosensor to better detect TNT by genetically engineering the DNA in the M13 bacteriophage to bind with sites specific to TNT. The researchers then exposed the biosensor to two additional chemicals, DNT and MNT, which have similar molecular structures to that of TNT. The engineered biosensor successfully distinguished TNT from the other chemicals with distinct color bands.

The biosensors were also able to signal changes in relative humidity, ranging from 20 percent to 90 percent, becoming redder with moister air and bluer with drier air.

The study lead author is Jin-Woo Oh, a former postdoctoral researcher in Lee's lab and now an assistant professor in the Department of Nanomaterial Engineeringat Pusan National University in South Korea.

The National Science Foundation; the Defense Acquisition Program Administration and Agency for Defense Development in South Korea; Korea's Ministry of Education, Science and Technology; and Samsung helped support this work.