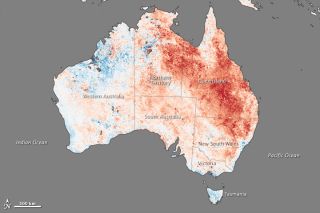 Record-high heat has scorched Australia this week, with temperatures exceeding 104 degrees Fahrenheit (40 degrees Celsius) for several days in a row in some areas. Relief is expected for this weekend, however.

Blazing temperatures have hit athletes and fans at the Australian Open in Melbourne, in what forecasters said could be the hottest stretch of weather in a century for the city. So what's causing the inferno?

"Almost all heat waves form due to unusually strong areas of high pressure at high altitudes — or a so-called ridge in the jet stream," said Jason Samenow, weather editor at The Washington Post. "This one is no different." [The 9 Hottest Places on Earth]

Samenow said the heat wave is already Australia's second this year, following record heat earlier in January. The country had its hottest year on record in 2013.

Authorities have issued bushfire warnings for much of the southern part of the continent, calling it the worst fire danger since "Black Saturday" in 2009, when a firestorm in Victoria state killed 173 people and destroyed more than 2,000 homes.

"The forecast weather patterns are quite reminiscent of conditions before Black Saturday, with severe and expansive high temperatures across the southern part of the continent and the presence of low pressure cells on either side of the country in the tropics," bushfire specialist Jason Sharples of the University of New South Wales in Canberra told Agence France-Presse. Due to the high temperatures and low relative-humidity, the vegetation will be very dry, so a bushfire would spread more quickly than usual, Sharples added.

Heat and wildfires are common during December through February (Australian summer), but the heat is unusual this year. That's because the El Nino — a band of unusually warm ocean temperatures in the central and eastern equatorial Pacific — is supposed to be in a neutral period. When it's active, El Nino tends to bring hot, dry conditions to Australia, so seeing them during the neutral period is surprising.

Debate exists over whether climate change has played a role in this or other extreme heat waves in recent years.

James Hansen, a researcher at NASA's Goddard Institute for Space Studies in New York, co-authored a report in 2012 that made a close connection between climate change and the increasing occurrence of heat waves since 2000. Hansen's team wrote, "It follows that we can state, with a high degree of confidence, that extreme anomalies such as those in Texas and Oklahoma in 2011 and Moscow in 2010 were a consequence of global warming because their likelihood in the absence of global warming was exceedingly small."

Martin Hoerling, a meteorologist with NOAA's Earth System Research Laboratory in Boulder, Colo., on the other hand, says that climate change has not affected the frequency of heat waves, which are part of normal weather patterns. However the maximum temperatures of those heat waves have increased as average global temperatures have risen over the past century or so.

"There is no evidence that the patterns are becoming more energetic or more frequent. It's simply that when those weather patterns occur, they now occur in a warmer climate," Hoerling told LiveScience.

As the planet continues to warm, however, those deep-seated features of the atmosphere may, indeed, experience more significant changes, Hoerling said.