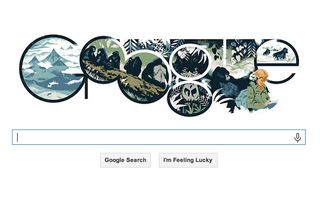 On Jan. 16, 2014, Google altered its logo above its search bar to commemorate Dian Fossey's birthday.

Thursday's Google Doodle celebrates American zoologist Dian Fossey, who is famous for studying mountain gorillas in their natural environment. Today would have been her 82nd birthday.

After meeting anthropologist Louis Leakey in east Africa in the early 1960s, Fossey, then an occupational therapist, was inspired to study gorillas by living among them as Jane Goodall did with chimpanzees. In 1967, she established the Karisoke Research Center in Rwanda, where she would study the primates for the next 18 years, documenting their behavior and social relationships.

Fossey was found mysteriously killed in her base camp at Karisoke in 1985. She was buried near a graveyard she established for gorillas mutilated by poachers, including one of her favorites, Digit, whose head and hands were cut off to be sold as souvenirs. Fossey, who also earned a Ph.D. from Cambridge University and founded the Digit Fund to promote conservation efforts and protect endangered mountain gorillas. After her death it was renamed the Dian Fossey Gorilla Fund International. Her book "Gorillas in the Mist" inspired the 1988 movie starring Sigourney Weaver.