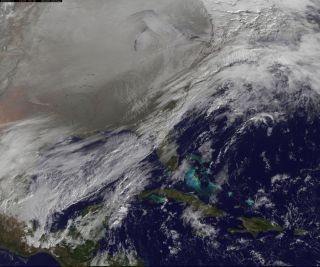 Was the crisp bite of frozen air during this month's polar vortex a remembrance of winters past for Americans? According to weather data collected by one meteorologist, this taste of Arctic chill may be growing rarer.

The cold snap triggered by the polar vortex, the low-pressure weather pattern that rammed into the United States from the Arctic the week of Jan. 5, was pretty paltry compared to cold waves in the past four decades, said Bob Henson, a meteorologist at the National Center for Atmospheric Research in Boulder, Colo.

"If you look at the number of days it stayed cold all day and all night, this cold wave was much briefer than past cold waves," Henson told LiveScience. "There are many ways to measure a cold wave, but the brevity of this one just jumps out."

With warm temperatures quickly returning to states such as Oklahoma, which is in the 50s Fahrenheit (teens Celsius) this week, Henson recently decided to compare the length of the polar-vortex freeze to earlier cold snaps. He worked with data provided by colleague Brandt Maxwell of the National Atmospheric and Oceanic Administration.

For cities including New York, Atlanta and Chicago, this month's deep cold was much briefer than past cold waves, Henson found. The 1970s and the 1980s were the worst of the bunch, with Chicago suffering through 40 days of below-freezing temperatures at least one year during these decades.

"The evidence is anecdotal, but it does point to the interesting possibility that cold waves are getting shorter in the U.S.," Henson said.

"With global temperatures and cold waves, we don't expect linearity," Henson said. "There's going to be some variability in the mix."