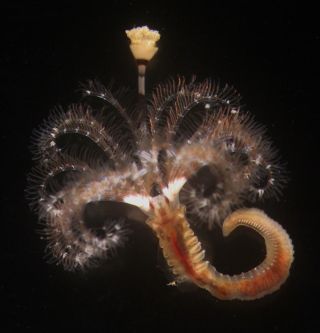 An adult H. elegans out of its tube. As adults, the tubeworms feed on algae using fanlike structures that protrude from their heads.
(Image: © Brian Nedved)

Marine tubeworms start their lives as floating blobs that drift through the ocean looking for a spot to take up residence as sedentary juveniles. Now, researchers have found the gelatinous larvae need a nudge from pointy bacterial structures to metamorphose.

In recent years, scientists have found that many seafloor creatures — including some species of coral, sea urchins and tubeworms — require bacteria to go through metamorphosis. But researchers haven't understood exactly what bacteria do to instigate this important transition.

Now, researchers at the California Institute of Technology have taken a closer look at genes within a common mat-forming marine bacteria called Pseudoalteromonas luteoviolacea, which are thought to be responsible for metamorphosis in the tropical/subtropical tubeworm Hydroides elegans. The researchers discovered networks of strange structures produced by these genes that appear to be key to metamorphosis, the team reported today (Jan. 9) in the journal Science Express. [Images: Bacterial Structures Induce Tubeworm Metamorphosis]

The researchers imaged the newly discovered structures using a method called electron cryomicroscopy, in which they flash-freeze bacterial cells and then take numerous stacked photographs that, together, create 3D images similar to those produced by medical MRIs.

In analyzing the images, the team found that the structures look similar to the tail of a virus, and also resemble a syringe, with an exterior sheath that contracts and ejects out an inner tube, which goes into the larvae, study co-author Nicholas Shikuma told LiveScience.

The researchers still do not know exactly how these so-called metamorphosis-associated contractile structures (MACs) force the free-floating tubeworm larvae into their sedentary juvenile stage. Even so, they have determined that, in the absence of the genes that produce the MACs, the larvae do not metamorphose. This is the first time that such viruslike structures have been found to facilitate something beneficial to an animal.

Through their imaging analyses, the researchers found that the MACs multiply within a bacterial cell until the cell breaks open, or lyses, and releases the MACs into the external environment. The MACs then link together to form complex nets.

In the laboratory, larval H. elegans develop over the course of about five days before seemingly probing for bacterial mats and settling down. The researchers think the larvae similarly probe for the bacterial mats in the wild, which often colonize rocks and ship bottoms (called biofouling), Shikuma said.

As they grow into adulthood, H. elegans develop hard outer tubes that can clog pipes and ballast inflows in ships, and can increase fuel consumption for ships by increasing drag. As a result, this particular tubeworm species is considered a serious pest. Shikuma says the new findings could potentially help determine ways to mitigate H. elegans' growth on boats.

Soon the team hopes to take a closer look at the mechanism by which the MACs affect the larvae. The researchers also plan to investigate how widespread MACs are in the environment, and the extent to which other marine animals rely on them for metamorphosis.

Some coral species have been shown to require P. luteoviolacea for metamorphosis. If MACs also turn out to be important for coral metamorphosis, researchers might one day use MACs to promote coral colonization in the wild as they suffer from future environmental change, Shikuma said.

Megan Huggett, a researcher at Edith Cowan University in Australia who has worked with members of the research group previously but was not involved in this new study, said she is excited by the new findings, and agrees that they could have interesting applications in marine conservation.

"If you can isolate something that is going to cause larvae to metamorphose and you can grow them in bulk, that would be wonderful," Huggett told LiveScience. "It would be very exciting, but that would need a lot of future work."