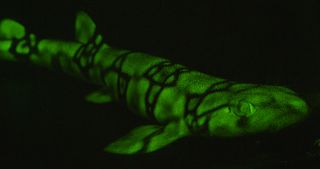 Well-camouflaged, neutral-colored fish may appear drab to the naked eye, but many actually live secret lives cloaked in flamboyantly bright colors visible only to other fish, new research suggests.

Lots of marine animals — including certain fish, jellies and plankton — glow colors that are visible to the human eye through a chemical process called bioluminescence. Animals also produce bright colors that are not visible to the human eye, through a process called biofluorescence, in which electrons within certain proteins absorb light at one wavelength and then re-emit it at a lower-energy wavelength. With special filters, humans can see this fluorescence appear as bright red, green or orange light.

Biofluorescence is commonly known among many jellies, corals and other marine organisms, but less commonly reported in fish. Researchers at the American Museum of Natural History in New York City decided to determine the extent of this phenomenon in the fish world by analyzing hundreds of species in the Bahamas, the Solomon Islands and in U.S. aquarium collections. [Photos: Fish Secretly Glow Vibrant Colors]

The scientists were surprised to find that more than 180 species — nearly 20 percent of the study group — displayed the phenomenon.

"We thought that if we found anything, it would be relatively rare among fishes," study co-author John Sparks told LiveScience's OurAmazingPlanet. "I never expected it to be so widespread."

Sparks says he was surprised by the findings, as so few studies have reported the phenomenon, likely because special equipment is required to capture the light in a way that is visible to the human eye.

To analyze the fish, the researchers traveled to their study sites at night to avoid ambient light, and stimulated the biofluorescence using high-energy blue light. They then used special filters and specially retrofitted cameras to capture the glow.

The team found a wide variation in the pattern, color and intensity of fluorescence among closely related fish that looked nearly identical in normal white light. The scientists also found the best camouflaged fish — those with the dullest coloration in white light — produced the brightest, most flamboyant glow.

The researchers have determined that many, though not all, of the groups of fish studied contain filters in their eyes that theoretically should allow them to see the bright colors invisible to the human eye. This suggests the fish use the coloration as a form of communication, or possibly as camouflage: Scorpionfish, for example, fluoresce a bright orange similar to the bright-orange fluorescence emitted by the corals it rests on.

Interestingly, many predatory fish, such as certain shark species, do not have the filters in their eyes that would allow them to see the bright colors of potential prey fish. As a result, the researchers believe the fluorescence might offer the fish a private wavelength by which they can communicate with other fish of the same species. Evidence for this scenario has also been found in certain fluorescent cephalopods (a group of marine animals that includes squid, cuttlefish and octopus). Still, more research is needed to determine the function of the colors and the extent to which fish can see them, Sparks said.

Tom Cronin, a biologist at the University of Maryland, Baltimore County who studies fluorescence in mantis shrimp and other invertebrates and was not involved in this study, finds the report interesting, but said that he is not convinced the fluorescence is necessarily significant to the fish. Instead, he said it may just be serendipitous, like the way human teeth glow blue in ultraviolet light for no apparent evolutionary reason.

"The jury is still out," Cronin told LiveScience's OurAmazingPlanet. "The real question is whether the fluorescence is strong enough to make a difference to the perceived color of the animal."

The researchers plan to answer this question by studying the potential behavioral significance of the coloration. They also hope to continue documenting the occurrence of fluorescence in additional species to better understand its role in the evolution of fish that otherwise look nearly identical, Sparks said.

The findings were detailed online Jan. 8 in the journal PLOS ONE.