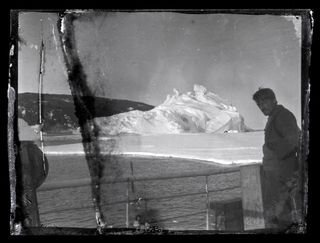 Twenty-two century-old images of Antarctica have been developed for the first time in New Zealand, providing a glimpse of the historic exploration of the southernmost continent.

Damaged negatives pulled from Capt. Robert Falcon Scott's last expedition base at Cape Evans on Antarctica's Ross Island reveal landscapes and icebergs from between 1914 and 1917 — and one striking portrait of an expedition geologist.

The pictures come from explorer Ernest Shackleton's last Antarctic expedition, the Imperial Trans-Antarctic Expedition. The goal of this expedition was to cross the entire continent, passing over the South Pole on the way. Instead, Shackleton and his crew were stranded when their ship, the Endurance, was trapped, and then crushed, by pack ice on the South America side of Antarctica. Another ship, the Aurora, was supposed to sail to the New Zealand side of the continent to lay supplies for the last quarter of Shackleton's march across Antarctica. In May 1915, a storm set the Aurora adrift, stranding part of its crew on Ross Island.

The 10 men left behind camped at Scott's old hut on Cape Evans. (Scott died in 1912 during a race to be first to the South Pole. His team made it to the South Pole, but was beaten by Norwegian Roald Amundsen and his men. No one from the Scott expedition survived the journey back.) Three years after Scott's last mission, the Ross Island Party lived off of seal meat and supplies left behind; three would die trying to set supplies for Shackleton's failed mission before the others were finally rescued in 1917.

One of the shore party, geologist and chief scientist Alexander Stevens, appears in the newly developed photographs, posing with his hands on his hips on the Aurora. In another, Stevens stands on the deck of the ship, with Ross Island in the background. Other images show snow, icebergs and the Ross Sea.

Conservation specialists with the New Zealand Antarctic Heritage Trust found the negatives clumped together in a box in the hut as part of a project to conserve and restore historical items left at the expedition base. The negatives are damaged by mold and required specialized treatment to develop, but the resulting images give a clear view of Ross Island 100 years ago.

"It's an exciting find, and we are delighted to see them exposed after a century," Nigel Watson, Antarctic Heritage Trust's executive director, said in a statement. "It's testament to the dedication and precision of our conservation teams' efforts to save Scott's Cape Evans hut."