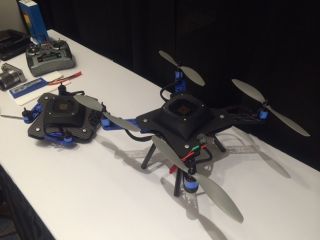 CHICAGO — Though archaeologists have come a long way since Indiana Jones, they sometimes still cling to antiquated technologies, like balloons and ladders to take photos of their discoveries and trenches from above.

Arch Aerial showed off their small vehicle — which is made largely from 3D-printed parts and runs on open-source flight software — here at the Archaeological Institute of America's annual meeting this past weekend. [9 Totally Cool Uses for Drones]

For CEO Ryan Baker, 22, the seeds of inspiration for a field-ready drone came while he was working on georeferenced maps of the Poggio Civitate, an Etruscan archaeological site in Italy, using four photos taken (quite expensively) from a helium balloon.

"I knew that was a little inefficient, and I thought it would be cool to have photos throughout the entire excavation from before we broke ground to the photos that we used in publication," Baker said. Over the next year and a half, he pulled together the team who founded Arch Aerial, and they developed their multi-rotor unmanned aerial vehicles, or UAVs.

"We use a lot of 3D-printed parts," founding member Ben Martin, 25, said. "It's really useful to be able to go from design to implementation within a few hours, which is something that wasn't possible until recently."

The team traveled to 12 excavations in Belize and Italy over this past summer to test out their prototype and check out the competition before coming up with a final design. Just in those test runs, Baker says they helped make some unexpected archaeological discoveries. For instance, on their second day of excavations in Belize run by their alma mater, the University of Texas at Austin, they found new structures after doing an aerial survey from more than 300 feet (91 meters) up.

"We got the imagery and sat down at dinner that night with the site director and found four new structures that they hadn't even found after eight years of pedestrian survey," Baker told LiveScience. "And one of the structures was a 10-by-10-meter platform — you can't see it on the ground when you're walking around, because the saw grass is too high."

Though the drones were originally developed with archaeologists in mind, the team realized from the start there was a demand for this type of vehicle in other industries.

"We found out very quickly that there are so many applications — real-estate development, search-and-rescue, security — anything film production to academic research," Baker said.

Arch Aerial UAVs have been used to film car commercials in Colorado, check on the health of plants at vineyards in Texas and make a spoof video about kitchen drones at a restaurant in Austin. Baker and Martin also said they're working on a project to film downhill skiing, with the drone rigged to follow the skiers by tracking a cellphone in their pocket.

As part of its plan to implement commercial drone regulations by 2015, the FAA recently designated six drone-testing centers across the country. Arch Aerial is waiting to see how the new laws will impact their work. But archaeological expeditions often require foreign travel. Sometimes flying drones in another country can be challenging, not only because some governments don't like the idea of UAVs in their airspace, but also for technical reasons, Martin said.

Martin says their goals for this year are to figure out how they can incorporate Lidar (a remote-sensing technology) and a fixed wing into their design.

Right now Arch Aerial is selling their archaeology drone kits for $3,800 and leasing them for three-month field projects for $1,800.