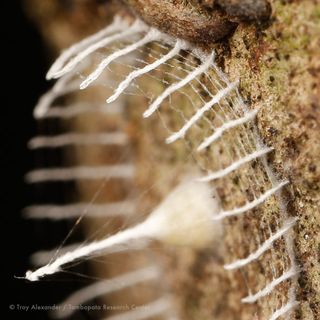 About six months ago, a graduate student at the Georgia Institute of Technology first spotted a mysterious web unlike anything scientists had seen before: Each one of the weird webs was a tiny sphere surrounded by a circular fence less than an inch (2 centimeters) in diameter.

The student, Troy Alexander, found the mysterious formation underneath a tarp at the Tambopata Research Center in Peru and had no idea what it was, so he posted photos of the webs on Reddit. Despite consulting with several experts — who made several wild guesses, from moths to slide molds — no one knew what built the structure, or for what purpose.

"I've had some experts write me and say they don't have an expert opinion on it because it is so bizarre," said Rice University ecology graduate student Phil Torres, who uncovered the web's maker and worked with Alexander. [See Images of the Weird Amazon Web Structure]

Return to the scene

About a month ago, the researchers finally got a chance to go back to the spot where they found the webs. They searched around the area where the first ones were found, eventually spotting 45 to 50 of the weird formations.

They then spent day and night studying the structures to see if they could find any signs of activity.

"We were really hoping to catch something being made or hatching out of it, or interacting in some way," Torres told LiveScience's OurAmazingPlanet. And they did.

One of their first hypotheses was that the blobs in the middle were spermatophores, or packages filled with sperm and nutritious food that would attract female spiders. But over the course of a week, they didn't find any signs of females coming to eat the packages.

Finally, the researchers removed three of the structures from a tree and put them under a glass. After about a week, the mystery was finally solved when two spiderlings came out of two of the structures, and later, a third spiderling hatched from the formation. [See Images of the Web Towers and Spiderlings]

Past studies have found spiders laying egg sacs with at least six eggs, so finding sacs that contain just one egg is incredibly strange, Torres said.

The researchers still don't know what types of spiders make the webs.

"We don't even know what family, what group they're in," Torres said. To find out, they'll need permits to collect the spiders and grow them to adulthood.

The purpose of the fence also remains a mystery, though the researchers have a few theories.

During one of their days of observation, they saw an ant approach a tower and then turn back. The web towers are found on Cecropia trees, which have a symbiotic relationship with ants, so one possibility is that the fence defends against ant invaders that live on the tree.

The researchers also saw some mites crawling around the towers.

"It could be that these fences are designed to capture mites, so that whenever the spiderling hatches, it could have something to eat right there," Torres said. It's even possible that the spiders use some chemical attractant, such as a mite pheromone, to lure them to the webs, he said.

Either way, Torres said he's happy that the biggest mystery has been solved.

"I can sleep at night knowing it's a spider," he said. "We had just no clue before this."