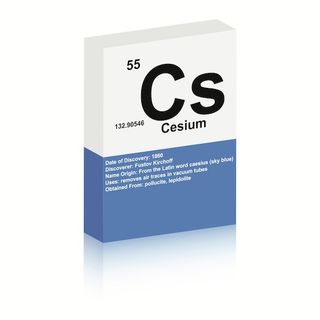 Cesium chloride is sometimes used as an alternative treatment for cancer, but there is no evidence that it works.
(Image: © Cesium symbol image via Shutterstock)

The 61-year-old woman had been taking cesium supplements daily for a year as a treatment for breast cancer, but it was a single injection of cesium chloride liquid into a lump in her right breast that is likely what ultimately proved fatal, the report said.

The woman had been following the advice of a nutritionist, who had recommended cesium chloride to help shrink her breast tumor.

Cesium chloride is an alternative treatment that "supposedly increases the pH level of cancer cells to kill them, while not altering the pH of healthy cells," said study author Dr. Daniel Sessions, who was a medical toxicology fellow at the Rocky Mountain Poison and Drug Center in Denver and was involved in the case. (A cell's pH is a measure of how acidic or basic its internal environment is.)

However, this theory of how cesium chloride works "has not been scientifically proven to be true," Sessions said. [7 Medical Myths Even Doctors Believe]

According to a review of alternative treatments on the American Cancer Society's website, the "available scientific evidence does not support the claim that the pH inside a cancer cell is any different than that of a normal cell, or that cancer cells are more susceptible to toxic effects of high pH."

Cesium chloride is available in both an oral supplement and a liquid form, and it's found in stores that sell dietary supplements as well as online. Some alternative medicine practitioners who promote the treatment's use for cancer also refer to it as "high pH therapy."

The case report appeared in the December issue of The Journal of Alternative and Complementary Medicine.

The night before the Colorado woman was rushed to the emergency room, her husband had injected a solution of cesium chloride into her breast lump, according to the case report. Not long after this injection -- the first one she had received -- she started to feel sick.

Her family told doctors she collapsed the next day at home apparently after suffering a heart attack. They performed CPR, but she remained unconscious, so they brought her to the emergency room.

She had no prior history of heart disease, but had been taking several dietary supplements during the past year to treat a breast lump she had discovered, which a physician had counseled her was likely cancerous. But she had refused to undergo a biopsy to make a definitive diagnosis of breast cancer, and had not been seen by a physician for further treatment in more than a year, Sessions said. [6 Foods That May Affect Breast Cancer Risk]

While in the hospital, doctors examined the woman and agreed that the tumor on her right breast was cancerous and had spread to her lymph nodes, Sessions said.

In addition to taking cesium chloride supplements daily, she was supplementing with selenium, potassium, vitamin D, silymarin, folic acid and a multivitamin.

Ten days after she arrived at the hospital in August 2011, the woman died.

Several factors contributed to her death, Sessions said. She had abnormally high cesium levels in her blood, because she had been taking the oral supplements for many months. Her symptoms after receiving the cesium chloride injection suggest that it was the most likely cause of her rapidly declining health, Sessions said.

High cesium levels can be dangerous because the metal can cause an abnormal heart rhythm. In the woman's case, cesium is what undoubtedly led to the woman's cardiac arrest and failure to regain consciousness, Sessions said.

Other cases of using cesium chloride as an alternative cancer treatment have also involved serious side effects, such as life-threatening heart rhythm problems, loss of consciousness, seizures and electrolyte imbalances involving sodium and potassium.

Sessions said that complementary and alternative medicine therapies have a place in the treatment of disease, however, supplements "should not be thought of as benign or harmless."

Sessions said dozens of cancer patients around the world have died from the use of cesium chloride or cesium carbonate as a treatment. In most of these cases, the patients were orally taking supplements, or using the metal intravenously, he said.

"This was a unique case because the patient injected cesium chloride directly into the tumor," Sessions said.

The researchers decided to report the case in a medical journal "to show the danger of this product, in any form," he said.