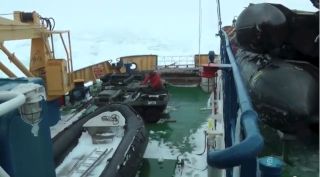 A big year for Antarctic sea ice is causing headaches for ship captains.

An Australian expedition aboard an ice-strengthened Russian ship is currently awaiting rescue offshore East Antarctica after becoming trapped in pack ice blown in by a holiday blizzard.

The Australians were only 2 nautical miles (about 4 kilometers) from open water but couldn't push through the ice on Christmas Eve, expedition leader Chris Turney, a professor at the University of New South Wales, wrote in a blog post. A powerful blizzard then trapped their ship, the MV Akademik Shokalskiy, between fast ice, which is "fastened" to the coastline, and wind-driven ice floes. A distress signal was sent on Christmas Day because the Shokalskiy couldn't escape the ice, though the ship wasn't in danger and was packed with plenty of food and supplies.

By Friday morning (Dec. 27), a Chinese icebreaker, the Xue Long (Snow Dragon), was in sight of the ship, and two more icebreakers were en route, according to the Australian Maritime Safety Authority.

"There's a lot of relief amongst the team, and there's lots of happy faces," Turney said Friday in a video posted to YouTube.

Antarctica's unusually high sea-ice extent this year has played havoc with the summer research season. In September, the Antarctic spring kicked off with a record high of 7.51 million square miles (19.47 million square kilometers) of sea ice — the most sea ice seen since satellite tracking started in 1978. Then, temperatures were lower than average in November around the Antarctic Peninsula and much of the western reaches of the Southern Ocean, favoring lingering ice, according to the National Snow and Ice Data Center in Boulder, Colo.

In November, sea ice prevented a U.S. research ship from delivering scientists and supplies to Palmer Station, a research station located on Antarctica's Anvers Island. The ice-strengthened RV Laurence M. Gould became stuck 2 miles (3 km) offshore, and had to return to Chile instead of making a mid-November stop at the station, according to the Antarctic Sun. Scientists awaiting a trip back home on the RV Gould instead left on a tourist cruise ship that took advantage of a later break in the ice.