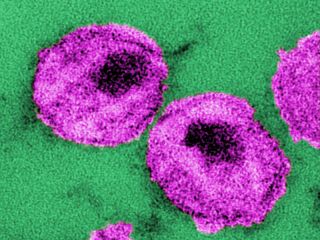 The reason people who are infected with HIV die is because their white blood cells die, leaving them unable to fight infections. Now, researchers show for the first time that this cell death is caused by cellular self-destruction, and is linked with inflammation.

"We found that depletion of [these cells] is more about cellular suicide, rather than murder by the virus itself," said Dr. Warner Greene, the senior author of two studies published today (Dec. 19) in the journals Nature and Science.

The researchers also showed that a drug that has already been tested in humans, but not HIV patients, can prevent the depletion of these white blood cells in human cells, said Greene, who is a researcher at the Gladstone Institute of Virology and Immunology, a biomedical research organization affiliated with the University of California, San Francisco.

"The findings open the door to an entirely new therapeutic approach in treating AIDS patients by targeting the immune response against HIV, rather than targeting the virus directly," said Christopher E. Rudd, professor of immunology at the University of Cambridge in the U.K. who was not involved in the studies.

Such an approach could save the immune cells from destruction, and allow them to mount an immune response against HIV, Rudd said.

One of the major questions about HIV infection is how the virus causes the death of so-called "bystander" immune cells that are never fully infected with HIV.

The new studies show that these "bystander" cells don't die because of toxic effects of the virus, but rather as a result of the human body's immune response that is launched against the virus within these cells. The virus enters the cells, and starts the process to make more viruses, but never finishes.

Instead, the cells die, releasing inflammatory molecules that attract more cells to the site, that in turn also die. [7 Devastating Infectious Diseases]

This cellular suicide, the team demonstrated, is a unique process called pyroptosis — cell death linked with inflammation. The study published in Nature today is the first to directly link HIV and this type of cell death.

"Identifying pyroptosis as the cause of [immune cell] death following HIV infection is a huge deal," said Siddharth Balachandran, an immune system researcher at the Fox Chase Cancer Center in Philadelphia who was not involved in the study. "This not only explains why these cells are depleted and cause AIDS, but also supplies readily druggable targets for therapeutic intervention."

The team also identified the protein inside the immune cells, called IFI16, that kicks off the harmful immune response. IFI16 works by sensing the small amount of HIV DNA inside the cell, according to the paper published today in Science.

In experiments, a molecule that blocks the activity of the pyroptosis pathway was able to block the death of the immune cells and prevent inflammation, the researchers found. The drug (called VX-765, or Belnacasan) has already been studied in human clinical trials for other chronic epilepsy and psoriasis.

Greene said he is now in discussions to test the drug in HIV clinical trials, as treatment for patients who are resistant to current therapies, or in combination with treatments to block or limit inflammation.

A drug that can limit aspects of inflammation is important, said John Hiscott, a virologist at the Vaccine and Gene Therapy Institute of Florida who was not involved in the studies. "Inflammation is what wears down the immune system in HIV patients, to the point where the virus can no longer be controlled."