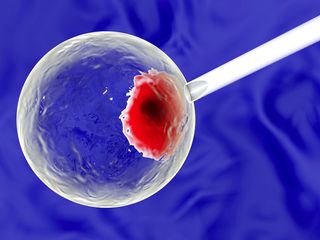 Stem cells can be created in a way that sharply reduces the risk of these cells dividing haphazardly and becoming cancerous, according to a new study. This potential for stem cells to become cancerous is a danger that plagues stem cell research.

The researchers published their new method today (Dec. 17) in a video article, akin to a cooking demonstration that shows other scientists how to make these stem cells, in the Journal of Visualized Experiments (JoVE).

The research group, led by Dr. Kostas Kostarelos of the University of Manchester in England, built upon a technique developed by Shinya Yamanaka of Kyoto University in Japan, who won the 2012 Nobel Prize for his work.

As with Yamanaka's approach, Kostarelos' new technique creates stem cells called induced pluripotent stem (iPS) cells. These iPS are ordinary adult cells, such as skin cells, that have been transformed into an embryonic state, and that can be reprogrammed, in theory, to become any other kind of cell, such as nerve or heart cells.

Yet the difference between the approaches is twofold: In the new technique, Kostarelos' team uses a ringlet of DNA called a plasmid, instead of a virus, to bring the genetic instructions into a cell so that it can become a stem cell; and his team did this in a live mouse, instead of in a dish of cells.

Scientists classify the natural stem cells in mammals into two broad categories: adult stem cells and embryonic stem cells. Adult stem cells are found in various tissues and replenish the cells found in those specific tissues, such as skin or blood.

Embryonic stem cells are from the embryonic stage of development, and can differentiate into all the varied cells found in a complex organism, from the brain down to the toes. Doctors have hoped to use embryonic stem cells to essentially repair damaged tissue — injecting them into a spinal cord, for example, to grow new nerve cells after paralysis.

However potent for curing diseases, human embryonic stem cells originate from discarded embryos created in fertilization clinics; and there is debate about the ethics of using such embryos in research or treatments.

Yamanaka's relatively simple method to create iPS cells is considered revolutionary because no embryos are destroyed, thus bypassing this thorny ethical issue. Yamanaka discovered four genes that could be switched on to make an ordinary cell become more like an embryonic cell.

The only snag has been that researchers have difficulty controlling this change. The iPS cells often continue to divide and produce a tumorlike mass. This is because the virus used to bring the four key genes into a cell also can introduce other genetic information that causes mutations, or the pluripotent state of the cells persists for too long.

Using a plasmid ferry instead of a virus reduces these risks because the plasmid is shorter-lived, and does not integrate its genetic information to pollute the host cell. Yamanaka and others tried using plasmids instead of a virus in laboratory cell cultures as early as 2008, but met with limited success.

"We just asked a different question: 'Can we achieve cell reprogramming… within the tissue of a living animal, without inducing tumor growth?'" Kostarelos told LiveScience. "The answer to this question is yes, we can," as long as a cell's genetics are not changed permanently, he said.

The JoVE video is a follow-up to a paper that Kostarelos and colleagues at University College London published in the journal PLOS ONE earlier this year. Kostarelos said he wanted to show the technique via JoVE to teach others this straightforward method.

Kostarelos added that all forms of stem cells remain vital for research in the emerging field of regenerative medicine.

"Embryonic stem cells are very much needed as we develop and understand the iPS cell technology better," he said.