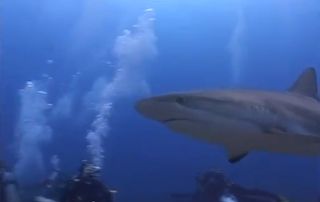 A Caribbean reef shark with divers off Honduras. Some sharks tend to approach humans from behind, new research shows.
(Image: © MrScubafan / YouTube)

Some sharks can likely tell which way humans are facing and tend to stay out of their field of vision, typically passing by or approaching people from the rear, new research suggests.

Although divers and shark scientists have noticed this tendency before, it hadn't been carefully documented, said Erich Ritter, a scientist at the Shark Research Institute in Florida. In a new study, published in December in the journal Animal Cognition, research volunteers kneeled on the seafloor for hours staring straight ahead, while interactions with Caribbean reef sharks were videotaped from above. About 80 percent of the time, reef sharks that came close to the subjects passed behind them.

Volunteers assumed this unusual posture and were told to remain still so as to not give sharks clues about their body orientation, Vitter said. But the sharks appear to have figured out which way the person was facing anyway — and favored passing behind the people, he added. [8 Weird Facts About Sharks]

"They truly do swim up from behind, be it that they want to sneak up or they don't want to be seen," Ritter told LiveScience. "It doesn't mean they sneak up in a way of having a vicious thought; mainly, they are curious but at the same time cautious."

It's unclear how the sharks are able to tell which way humans are facing, Ritter said. Perhaps they are able to see face masks from afar and know from previous experience with humans that this is where their eyes are located, he said. But since humans are an unfamiliar species to sharks, and don't resemble any shark prey species, this comes as a surprise, Ritter said.

Ralph Collier, a researcher with the Shark Research Committee in Los Angeles, said the study finding helps explain stories from commercial and sport divers, who have told him tales of turning around to find great white sharks staring them down. It also helps explain why most shark attacks take place from the rear, he added. Shark attacks remain extremely rare, only killing about 10 people globally per year.

"I think it's another piece of information that can be added to what we know about typical shark behavior," Collier told LiveScience.

But another researcher wasn't impressed by the paper. "I am not persuaded that the author's thesis was proven in this study," said George Burgess, director of the Florida Program for Shark Research at the Florida Museum of Natural History. "We don't know the past history of these sharks, and whether this interaction with humans represents a new experience," he said. In other words, the sharks may have seen people before, and it wouldn't be that surprising if they could recognize the masks of people and interpret them as eyes, since prey fish also have eyes, he said.