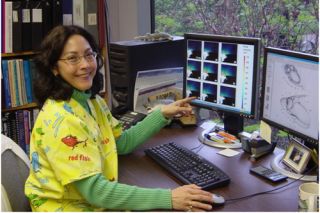 Cheryl Wilga points to an image on her left monitor showing how much water is moved into the mouth of a suction-feeding shark. The head muscles of sharks appear on her right monitor.
(Image: © Jason Ramsay)

If Cheryl Wilga's laboratory had an official soundtrack, it might be the notorious thump … thump … thump from the soundtrack of the movie "Jaws." That's because she and her research team study anatomical features and behaviors that impact the individual survival of fish — including the feeding behaviors of sharks and the role of the shark's iconic pectoral fins in swimming.

When I was a child, I was always fascinated by the diversity of animal behavior and read everything I could get on the subject. One of my favorite games to play with other children was "school," and I always wanted to be the teacher. Later in college, I worked as a surgical assistant for a veterinarian and was fascinated by the muscle and bone surgeries and what was done to restore function to an injured body part. At the same time, I conducted several undergraduate research projects with two scientists who studied fish morphology and function. Then I realized that I could satisfy my fascination with animal behavior and love of teaching by becoming a professor at a university where I could study whatever catches my interest and teach others about animal behavior.

My parents told me that the most important thing about a career was to be happy doing it. As a student, the best advice I was given was to make sure that you understood what you learned in class, rather than memorizing everything, and to study as much as you can. This worked very well, since I received enough scholarships based on grades to pay for my entire education. As a faculty member, the best advice was to maintain a work-life balance, and to sequester myself at least one day a week in a place where no one else is around (for me this is home) to analyze and write. This way, I have more time to help others when at the university.

Initially it is figuring out the mechanics of a new behavior with my graduate students (the life of the lab, in my opinion). But I consider it just as satisfying to tell my students about the cool behaviors that researchers identify in vertebrates. The students in my classes enjoy learning about how sharks feed, how salamanders project their tongue to catch prey, how lizards can run up walls, how birds fly and how dolphins echolocate (locate objects by reflected sound), for example.

You must be self-motivated and persistent in figuring out methods. Know where to find help when you need it and have faith in yourself, you made it this far!

I do lot of outreach that I enjoy. My graduate students and I work with several teachers at a local inner city middle school. We bring fish and other vertebrates to their classes for demonstrations, we give talks there, and we bring students to our university to run experiments. It is great fun and inspires some of the students to think about going to college. We also give talks at other schools, local libraries and aquaria, particularly during (Discovery Channel's) Shark Week.

I have been fortunate to have had excellent advisors who were influential in different aspects of my academic career: Karel Liem from Harvard University, who passed away in 2009, taught me to enjoy learning and life; Philip Motta gave me a solid grounding in research and taught me how to balance research and home life; and Peter Wainwright and George Lauder taught me how to practice excellent research.

What about being a researcher do you think would surprise people the most?

Probably that scientists frequently spend nearly as much time managing a lab and grants as conducting research and writing.

My students! Everything else is backed up somewhere else or replaceable.