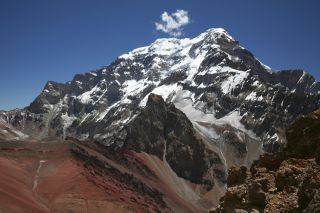 Part of the Andes mountain range, Aconcagua is the second highest of the Seven Summits (the highest peaks on each continent), behind only Mount Everest in Asia. At 22,837 feet (6,961 meters), not only is it the highest mountain in South America, it is the tallest peak in all of the Americas, as well as the Southern and Western Hemispheres.

Aconcagua is located in Argentina, in the province of Mendoza, and lies 70 miles (112 kilometers) northwest of the provincial capital, Mendoza, and 9.3 miles (15 km) from the border with Chile.

To the north and east is Valle de las Vacas, and to the west and south is the Valle de los Horcones Inferior. The mountain is part of the Aconcagua Provincial Park, a protected natural area in the Andes that was established in 1983.

It is not exactly known where the name Aconcagua came from. One possible origin is that it derived from the native Quechuan words akun, or "summit," ka, or "other" and agua, or "admired" or "feared," according to the Encyclopedia of World Geography. Another possibility is that it comes from Aconca-Hue, an Arauca phrase that translates as "comes from the other side" — meaning the other side of the Aconcagua River.

The name also may be derived from ackon cahuak, Quechuan words meaning "stone sentinel." Other options for the origin of the name are the Quechuan phrase ancho cahuac or "white sentinel," or aymara janq'u q'awa, meaning "white ravine."

The Andes Mountains were formed as the result of subduction of the oceanic Nazca Plate under the South American continent, according to Marieke Dechesne, a geologist with the U.S. Geological Survey. Aconcagua used to be a volcano, when the oceanic plate dipped at a higher angle under the continent.

However, sometime in the Miocene, about 8 to 10 million years ago, the subduction angle started to decrease causing the magma to stop melting and increasing the horizontal stresses between the oceanic plate and the continent, causing the thrust faults that lifted Aconcagua up off its volcanic root. [Related: What Is Plate Tectonics?]

The vegetation and wildlife on Aconcagua is concentrated below 13,123 feet (4,000 m), according to the Encyclopedia of World Geography. There are a number of low bushes, such as yellow firewood, yareta and goat horn, and there are open pastures made up of grasses such as huecú and ichu.

Many varieties of birds inhabit the area, including the condor, the purple eagle and a species of snipe called agachona. Spotted sandpipers and torrrentes, a type of duck, thrive in some of the areas with water. Mountain rats and the red fox are among the most common land animals.

The mountain is dotted with glaciers, with the largest one being the Ventisquero Horcones Inferior, which is 6.2 miles (10 km) long and near the Confluencia camp on the south face at about 11,811 feet (3,600 m). Other large glacier systems include Ventisquero de las Vacas Sur, Glaciar Este/Ventisquero Relinchos and the north-eastern or Polish Glacier, which is a popular ascent route.

During the summer, the temperature at night above 16,400 feet (5,000 m) is about minus 4 F (minus 20 C), and the typical temperature at the summit is minus 22 F (minus 30 C). The cold, snowy and unpredictable conditions discourage most from trying to summit in winter. Climbers sometimes compare the mountain's difficulty level to that of the "eight-thousanders": 14 Himalayan and Karakoram mountains more than 8,000 meters (26,247 feet) above sea level.

Climbers of Aconcagua often struggle with low humidity, low oxygen and fierce winds. Storms are often triggered by humid currents of warm sea air coming from the Pacific Anticyclone, a high-pressure system in the southern Pacific Ocean. These south-bound winds clash against the Andes Mountains, cooling and creating snow on the high peaks, according to Aconcagua Treks. In the summer, the mountain also has its share of lightning storms, creating an even greater risk for climbers.

When a storm is present at higher elevations, an enormous "mushroom" cloud can often be seen hovering around the summit. Even when the weather is good at base camps, including Plaza de Mulas Base Camp, the mushroom cloud serves as a warning sign that a fierce storm is occurring higher up and that nobody should attempt to climb to those levels, according to Aconcagua Treks. On the contrary, winds blowing from the south are an indication that good weather is coming.

About 60 percent of climbers who attempt the mountain succeed in summiting. Because it is not a highly technical climb, many mistakenly believe that it will be an easy ascent. More than 135 climbers have died on Aconcagua — primarily because of complications of altitude sickness, but also from falls, heart attacks, hypothermia and other causes due to severe weather — and about three climbers die each year on Aconcagua.

The most common route up Aconcagua is the Normal Route along the Northwest Ridge. In total it takes about 21 days from Mendoza, including hiking to the base of the mountain, establishing camps, doing acclimatization climbs, summiting and descending.

1883: German mountaineer and explorer Paul Güssfeldt makes the first attempt by a European to reach the summit of Aconcagua. Güssfeldt allegedly bribes some local men to be his porters by telling them there is treasure on the mountain, according to Aconcagua Treks. The team has poor equipment and is forced to head back down only about 1,640 feet (500 m) from the summit due to extremely dangerous winds.

1940: French climber Adrienne Bance is the first woman to summit as part of an expedition from of the Andinist Club of Mendoza.

1984: Titoune Meunier is the first woman to climb the South Face. She reaches the summit, along with her former husband John Bouchard, using the French 1954/Messner route.

1985: A well-preserved skeleton is discovered at 17,060 feet (5,200 m) on the southwest ridge of Cerro Pyramidal, an Aconcagua sub-peak, providing evidence that the pre-Colombian Incas had climbed Aconcagua.

2013: Tyler Armstrong, a 9-year-old boy from Yorba Linda, Calif., is the youngest to reach the summit.