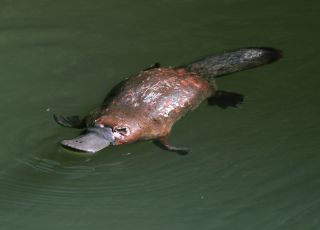 All of the monotremes, or egg-laying mammals such as the platypus and echidna, lost their stomachs during the course of evolution.
(Image: © worldswildlifewonders | Shutterstock)

Bizarrely, many species of animals, such as the carp and platypus, lost their stomachs in the evolutionary past, and new research suggests they may never evolve the organs back.

The stomach is the part of the gut where the main part of digestion takes place. Glands in this organ secrete enzymes known as pepsins, which break down proteins, and strong acids that soften food and help the enzymes work. The glands first appeared about 450 million years ago, and they represent an evolutionary innovation found exclusively in jawed creatures with backbones.

Surprisingly, the gastric glands that define the stomach are missing in a number of jawed vertebrates. In 1805, the French zoologist Georges Cuvier discovered that many teleosts, or the largest living group of fish, such as the carp family, lack stomachs. The past 200 years of research suggests that up to 27 percent, speaking conservatively, of all teleost species may lack stomachs. Primitive bony fish such as lungfish and some cartilaginous fish such as chimeras lost the organs as well. [See Photos of World's Freakiest-Looking Fish]

Fish are not the only creatures that can lack stomachs. All of the monotremes, or egg-laying mammals such as the platypus and echidna, also lost their stomachs during the course of evolution.

Scientists wondered if all of these examples of stomach loss had anything in common. Moreover, the researchers wanted to know if these animals might reinvent the stomach one day. There are a number of evolutionary instances of species redeveloping complex traits; for instance, a number of stick insects apparently reinvented the wing.

Since many animals have now had their genomes sequenced, researchers investigated 14 species with and without stomachs to see what genes they all might be missing. The scientists found that in all species examined, stomach loss was clearly linked with the complete loss of the genes responsible for pepsin and acid digestion.

The researchers suggest the ancestors of these stomach-free species grew to depend on diets in which digestion via pepsins and acids was not likely or even possible. For instance, diets rich in chalky shells or bottom muck can neutralize stomach acids. If these species adapted to survive without the need for a stomach, the genes for its function could then be lost by mutation over time without ill effect. These genes can be energetically costly to maintain, which could hasten their loss if they were rendered superfluous.

The investigators noted the loss of these genes suggests the reinvention of the stomach in these species is highly unlikely. Although species can redevelop complex traits, past research found the ancestors of those species retained the genes for those characteristics, and their descendants merely reactivated the genes. In contrast, the stomachless species the researchers analyzed have apparently lost the complex genes for gastric digestion beyond the point of recovery.

"It appears that once the stomach is lost, that's all folks," study author Jonathan Wilson, a comparative physiologist at the University of Porto's Interdisciplinary Center for Marine and Environmental Research in Portugal, told LiveScience.

Still, it might be possible for these species to regain stomachs in the distant future if they adapt genes similar to ones for acid and pepsin digestion. These similar genes "could, in theory, evolve similar functions" to those necessary for stomachs, study lead author Filipe Castro, an evolutionary biologist at the University of Porto's Interdisciplinary Center for Marine and Environmental Research,told LiveScience.

Future research can look for a missing link in the evolution of stomach loss — "animals lacking a stomach but having retained the genes," Wilson said. However, since there are at least 5,000 vertebrate species without stomachs, any such work could be like searching for "a needle in a haystack," he added.

Scientists can also investigate why the stomach emerged and persisted in evolution. "That will help to understand the phenomenon of loss," Castro said.

And researchers may be interested to find out what would happen if the genes for acid and pepsin digestion were inserted back into stomachless species.

"To put a stomach in a stomachless animal! Modern molecular biology techniques might allow this experiment," Castro said.

Castro, Wilson and their colleagues detail their findings online Dec. 4 in the journal Proceedings of the Royal Society B.