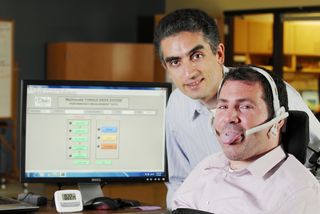 A magnetic piercing on the tongue is used to control a computer or wheelchair.
(Image: © Maysam Ghovanloo)

A new wireless device has allowed paralyzed people to drive a wheelchair simply by moving their tongues.

In a clinical trial, people with paralysis of all four limbs, a condition known as tetraplegia, effectively used the tongue-drive system to steer a wheelchair through an obstacle course or operate a computer.

High-level spinal cord injuries, a major cause of paralysis, currently afflict about 250,000 people in the United States.

"As of now, paralyzed individuals have very limited options," said study leader Maysam Ghovanloo, an electrical engineer at the Georgia Institute of Technology in Atlanta. The device could give people with severe disabilities greater independence and better quality of life, Ghovanloo told LiveScience. [See Video of Tongue-Controlled Wheelchair]

The tongue-drive system consists of a tiny magnet the size of a lentil, which sits in a titanium barbell tongue piercing. A headset containing wireless sensors measures changes in the magnetic field as wearers moves their tongues; the headset then sends these signals to a smartphone, which converts the tongue position into a command to control a computer cursor or drive a wheelchair.

In the study, Ghovanloo and his colleagues tested the device in 11 participants with tetraplegia and in 23 able-bodied participants. All participants received the magnetic tongue piercing. The participants then completed various tasks, such as clicking on targets on a computer screen, playing video games, dialing phone numbers and driving a powered wheelchair through an obstacle course, all by touching their tongues to the left and right inside edges of their teeth.

The able-bodied participants performed better than those with paralysis in the computer-based tasks, but the paralyzed individuals were slightly better at controlling the wheelchairs, the results of the trial, detailed today (Nov. 27) in the journal Science Translational Medicine, showed.

"We believe this is a result of [people's] prior experience," Ghovanloo said. The able-bodied participants were mostly students, who were very familiar with using computers, whereas some of the paralyzed people had rarely or never used a computer before. By contrast, the disabled individuals use a wheelchair every day, so they excelled at that task.

Another popular assistive technology for paralyzed individuals involves driving a wheelchair by sipping and puffing on a straw. Before the study, more than half of the paralyzed participants used sip-and-puff systems daily.

"We showed that the tongue-drive system is almost three times faster [at issuing commands] than sip-and-puff systems, but equally precise," Ghovanloo said.

Naturally, one would think that a tongue-drive system could be problematic during talking or eating. During speech, it turns out the tongue moves almost exclusively back and forth along the midline of the mouth, so Ghovanloo's team designed their system to ignore these movements and use only sideways tongue flicks as control signals.

While eating, however, the tongue moves all over the place, Ghovanloo said. To avoid inadvertently driving around while trying to eat lunch, users can hold their tongues against their cheeks for three seconds to put the system into a standby mode. When they finish eating, they can use the same command to turn the system back on.

The tongue-drive system gives people with disabilities more options in terms of assistive devices. "It's almost like prescribing a medication," Ghovanloo said. "Sometimes you have to go through several assistive technologies before you find one that matches the abilities of the patient."

Assistive technologies also reduce the burden on a patient's family members or caregivers, and can substantially reduce health-care costs.

The researchers are now working on a newer version of the tongue system that fits entirely inside the mouth, instead of requiring a headset, which could be knocked off. Ghovanloo and colleagues have started a company to develop the device commercially, but it must undergo additional testing and be approved by the Food and Drug Administration.