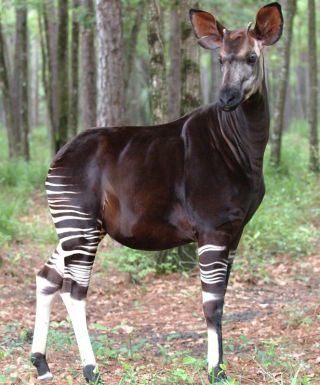 Okapi have been in serious decline since at least 1995. Though conservationists have not been able to obtain good population estimates for the species, only a few thousand are thought to be left in the Democratic Republic of the Congo.
(Image: © Bob Jenkins)

The International Union for Conservation of Nature (IUCN) has updated its "Red List" of threatened species, with good news for some creatures, including two kinds of albatross, but bad news for others, such as the okapi.

The okapi (Okapia johnstoni), sometimes called the "forest giraffe," has taken a turn for the worse in Africa: The species is now listed as endangered and its numbers are dwindling, IUCN officials said.

With stripes on its legs similar to those on the zebra, the okapi is revered in its native habitat within the Democratic Republic of the Congo (DRC), and it even appears on the country's currency. [In Images: 100 Most Threatened Species]

But protecting the species has been difficult amid political turbulence; armed rebels, elephant poachers and illegal miners are present in parts of the okapi's range, conservationists say.

"Sadly, DRC has been caught up in civil conflict and ravaged by poverty for nearly two decades, leading to widespread degradation of okapi habitat and hunting for its meat and skin," Noëlle Kümpel, who manages the Zoological Society of London's range-wide okapi conservation project, said in a statement. "Supporting government efforts to tackle the civil conflict and extreme poverty in the region are critical to securing its survival."

The IUCN's update also gives a grimmer outlook for the white-winged flufftail (Sarothrura ayresi), a small bird that lives in Ethiopia, Zimbabwe and South Africa. Faced with habitat destruction, the species is now among the nearly 200 birds listed as critically endangered, the IUCN's last category before extinction.

Some of this year's success stories, however, belie the fact that subpopulations of certain species still face serious threats. For example, the leatherback turtle (Dermochelys coriacea) has improved from critically endangered to vulnerable on a global level. But compared with the abundant leatherbacks in the northwest Atlantic Ocean, the east and west Pacific Ocean subpopulations are both in severe decline due to egg harvesting and incidental capture, IUCN officials said.

Overall, IUCN officials say they have assessed more than 70,000 species for their Red List, determining that 21,286 are threatened with extinction.

"This IUCN Red List update shows some fantastic conservation successes, which we must learn from, for future conservation efforts," Jane Smart, the global director of the IUCN Biodiversity Conservation Group. "However, the overall message remains bleak. With each update, whilst we see some species improving in status, there is a significantly larger number of species appearing in the threatened categories. The world must urgently scale up efforts to avert this devastating trend."