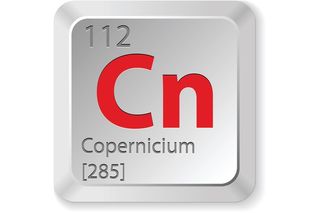 Word origin: Copernicium is named for Nicolaus Copernicus, the famed astronomer and mathematician. The symbol Cp was initially recommended for element 112, but was rejected because Cp had once been used as the symbol for lutetium, which, prior to 1949, was sometimes called cassiopeium.

Discovery: Copernicium was created and identified on Feb. 9, 1996, by a team led by Peter Armbruster and Gottfried Münzenber at the Gesellschaft fur Schwerionenforschung lab in Darmstadt, Germany. They produced atoms of 277Cn.

Copernicium is a radioactive, synthetic element about which little is known. It is classified as a metal and is expected to be solid at room temperature. Its properties are somewhat similar to radon, but its short half-life makes it difficult to study.

Copernicium has four isotopes whose half-lives are known. The most stable isotope is 285Cn, with a half-life of about 30 seconds. It decays through alpha decay.

Copernicium is produced artificially. It can be made by bombarding atoms of lead with ions of zinc through a linear accelerator.

Only a few atoms of copernicium have ever been made. Its only use is in scientific research.