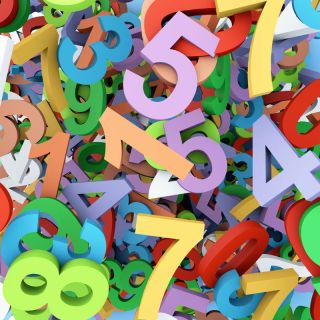 Of the more than 60 known types of synesthesia, grapheme-color synesthesia, in which people see every number or letter tinged with a particular color, is the most common.
(Image: © hkeita | Shutterstock)

People with autism may be more likely than others to have synesthesia, a condition in which people experience a mixing of their senses, such as hearing tastes and shapes, and seeing numbers in colors, a new study from Europe suggests.

Researchers tested 164 people with autism and 97 people without autism by giving them online questionnaires designed to evaluate whether they had synesthesia. They found synesthesia occurred in about 7 percent of people who didn't have autism, a figure within the range of previously reported rates.

In contrast, 19 percent of people with autism appeared to have synesthesia, according to the study published yesterday (Nov. 19) in the journal Molecular Autism.

The findings may provide new insights into common factors that underlie brain development in these separate conditions, said study researcher Simon Baron-Cohen, a professor of developmental psychopathology at the University of Cambridge in the U.K.

"I have studied both autism and synesthesia for over 25 years, and I had assumed that one had nothing to do with the other," Baron-Cohen said. [10 Things You Didn't Know About the Brain]

But now, looking back at previous studies, evidence does suggest there are underlying similarities between the two conditions, the researchers said. Brain-imaging studies have found evidence of particular patterns of brain connectivity in both synesthesia and autism.

According to one hypothesis, people with synesthesia have more neural connections between brain regions compared with people who don't have the condition.  Similarly, studies have found that while people with autism have fewer neural connections between distant parts of the brain, they have more local or short-range connectivity in some brain areas.

It is possible that the normal process of pruning of neural connections early in life is affected in both conditions, and people with autism or synesthesia retain some of the connections that other people have lost during their brain development, Baron-Cohen said.

This idea would give researchers "an exciting new lead" to search for genes that are shared between the two conditions, and which might play a role in how the brain forms or loses neural connections, said Simon Fisher, another researcher in the study, and director of the language and genetics department at the Max Planck Institute for Psycholinguistics, in the Netherlands.

Most synesthetic experiences are visual, but synesthesia can involve any pair of senses, the researchers said. Such experiences can range from seeing the letter A as purple, to conjuring mental images of a triangle shape when suffering a toothache.

Among the 31 people with autism in the study who had synesthesia, the most common forms of the condition were "grapheme-color," in which letters are seen as colored, and "sound-color," in which hearing a sound triggers a visual experience of color. Another forms of synesthesia reported were either tastes, touch, or smells triggering a visual experience of color.

"People with autism report high levels of sensory hyper-sensitivity. This new study goes one step further in identifying synesthesia as a sensory issue that has been overlooked in this population," said study author Donielle Johnson, a researcher at the Autism Research Centre at Cambridge University.

"These results suggest that some people with autism have synesthetic experiences that might influence their day-to-day behavior, preferences and aversions — just as synesthesia can affect the behavior of people without autism," Johnson told LiveScience.

To confirm the preliminary results of the questionnaire, the researchers asked the participants to find the colors they associated with letters and numbers, but only a few people completed that test that involved more than 240 choices, the researchers said. Future studies are needed to administer the test in the lab, rather than online, to confirm the self-reported synesthesia, they said. Email Bahar Gholipour. Follow LiveScience @livescience, Facebook & Google+. Original article on LiveScience.