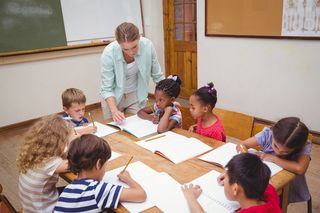 The percentage of kids with autism in the United States continues to rise, according to a new report from the Centers for Disease Control and Prevention (CDC).

A previous CDC report, released in 2016, suggested that the autism rate, or prevalence, was leveling off, but the new report shows that this is not the case.

"It is now clear that what we saw in 2016 was just a pause along the way. It remains to be seen at what point [autism spectrum disorder] rates will plateau," Walter Zahorodny, an associate professor of pediatrics at Rutgers New Jersey Medical School and a co-author of the report, said in a statement.

Autism spectrum disorder is a neurodevelopmental condition that affects communication, behavior and the ability to interact with others.

So what's behind the increase? Perhaps, rather than more kids having autism, just more of them are being diagnosed with it. Communities are doing a better job of diagnosing autism among minority populations, said Alison Singer, president and co-founder of the Autism Science Foundation, who was not involved in the new report.

This is a positive step, but the new report also revealed room for improvement in autism diagnoses, Singer said. For example, in 85 percent of the autism cases, there were notations in the children's health or educational records expressing concern about their development by the time they were 3 years old, but only 42 percent of the children received a developmental evaluation to diagnose autism by that age.

"Children are just not being diagnosed as early as they can be," Singer told Live Science. (An experienced professional can diagnose autism in a child by age 2; and in some cases, autism can be detected at 18 months or younger, according to the CDC. The American Academy of Pediatrics recommends all children be screened for autism at both 18 months and 24 months.)

This lag between when a parent, teacher or another person expresses concern about the child's development and the actual evaluation is problematic, because it affects when a child can begin interventional services for autism, Singer said. And the earlier a child starts these interventions, the better the prognosis, she said.

The new report used data from the CDC's Autism and Developmental Disabilities Monitoring Network (ADDM), a program that estimates autism prevalence based on reviews of children's health and education records when they are 8 years old. The ADDM is not a nationally representative sample of the United States, but it is one of the largest programs to monitor autism, and the only autism-tracking program that examines health and education records, the CDC said.

"It's really the gold standard of prevalence studies" for autism, Singer said.

The rate of 1 in 59 children (1.7 percent) with autism is the combined estimate for the 11 communities, which were in Arizona, Arkansas, Colorado, Georgia, Maryland, Minnesota, Missouri, New Jersey, North Carolina, Tennessee and Wisconsin. However, estimates varied widely among these 11 communities, from a low of 1 in 76 (1.3 percent) in Arkansas, to a high of 1 in 34 (1.9 percent) in New Jersey.

Some of these differences might be due to how autism is being diagnosed and documented in those areas, the CDC said.