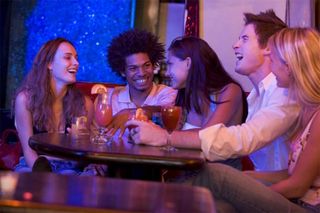 Having lots of friends is linked with greater connectivity between certain brain areas.
(Image: © Stockxpert)

SAN DIEGO — Being a social butterfly just might change your brain: In people with a large network of friends and excellent social skills, certain brain regions are bigger and better connected than in people with fewer friends, a new study finds.

The research, presented here Tuesday (Nov. 12) at the annual meeting of the Society for Neuroscience, suggests a connection between social interactions and brain structure.

"We're interested in how your brain is able to allow you to navigate in complex social environments," study researcher MaryAnn Noonan, a neuroscientist at Oxford University, in England, said at a news conference. Basically, "how many friends can your brain handle?" Noonan said. [7 Personality Traits You Should Change]

Scientists still don't understand how the brain manages human behavior in increasingly complex social situations, or what parts of the brain are linked to deviant social behavior associated with conditions like autism and schizophrenia.

Studies in macaque monkeys have shown that brain areas involved in face processing and in predicting the intentions of others are larger in animals living in large social groups than in ones living in smaller groups.

To investigate these brain differences in humans, Noonan and her colleagues at McGill University, in Canada, recruited 18 participants for a structural brain-imaging study. They asked people how many social interactions they had experienced in the past month, in order to determine the size of their social networks.

As was the case in monkeys, some brain areas were enlarged and better connected in people with larger social networks. In humans, these areas were the temporal parietal junction, the anterior cingulate cortex and the rostral prefrontal cortex, which are part of a network involved in "mentalization" — the ability to attribute mental states, thoughts and beliefs to another.

The researchers also tested whether the size of a person's social network was linked with changes in white-matter pathways, the nerve fibers that connect different brain regions.

Again, they found that white-matter tracts were better connected in people with bigger social networks. "The nerves were more like a Los Angeles freeway than a country road," Noonan said.

The researchers couldn't say whether social interaction caused these changes in brain structure and connectivity, or whether the brain determined how innately social someone was.

In the case of the monkeys, the researchers dictated the size of the animals' social network, so they concluded that social-group size was causing the brain differences.

It can be inferred that a similar process takes place in human brains, but to prove this, long-term studies are needed, Noonan told LiveScience.

The fact that some brain regions may be larger and more connected suggests other regions might be smaller in the brains of the more socially adept, Noonan said.

"If you're spending a lot of time in social environments using social skills and your brain's changing, maybe you're not learning to juggle in your free time or becoming proficient at the piano," she said. "The brain is just changing and optimizing to reflect your needs, and if that is thriving within a complex social environment, that is what your brain is reflecting."