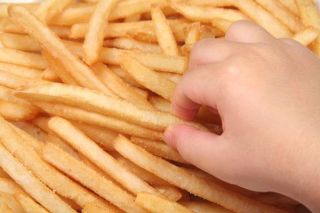 One version of the most popular vegetable in the United States.
(Image: © Devonyu | Dreamstime.com)

BOSTON — Fast-food chains have made some improvements in their menus and marketing practices over the last few years, but these changes are likely not enough to reduce the overeating of high-calorie foods by children and teens, according to a new report.

In good news, fast-food TV ads viewed by children ages 6 to 11 decreased 10 percent between 2009 and 2012, according to the report, from researchers at the Yale Rudd Center for Food Policy & Obesity. And most fast-food restaurants now include some healthful side options, such as fruit and vegetables, in their kids' meals. McDonald's automatically includes a half-portion of apples in their child meals, the report said.

However, in 2012, children and teens still saw three to five fast-food ads on TV daily, the report found. And fast-food chains have stepped up their advertising on social media websites and mobile phone devices, which are popular with young people. [10 Ways to Promote Kids' Healthy Eating Habits]

"The progress really is mixed," said Jennifer Harris, director of marketing initiatives at the Rudd Center. While traditional TV advertising has gone down, "there are a lot of other ways restaurants are reaching children now," said Harris, who presented the report here today (Nov. 5) at the meeting of the American Public Health Association.

The researchers recommended that fast-food restaurants limit their children's TV and Web advertising to healthful foods only. The industry should also set age limits on its social media and mobile marketing, they said.

The new report is a follow-up to a 2010 study by the same researchers. For the update, the researchers examined menu items and advertising practices of 18 top fast-food restaurants in the United States.

While some fast-food chains have added healthy sides, there needs to be more effort to include wholesome main meals, with more whole grains and vegetables and less saturated fat, said Marlene B. Schwartz, director of the Rudd Center.