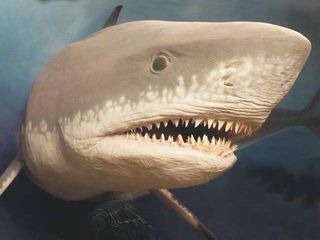 LOS ANGELES — Megalodon, the most massive shark ever to prowl the oceans, may have gotten so big that it was prone to extinction.

For some mysterious reason, though the biggest and smallest members of the species were the same length, many of the giant sea monsters got longer over a 14-million-year period, and then, they all went extinct, new research suggests..

Although it's not clear why the behemoths were getting bigger over evolutionary time, their big size may have made them more vulnerable to extinction, said study co-author Catalina Pimiento, a biology doctoral candidate at the University of Florida and the Smithsonian Tropical Research Institute in Panama. She presented her findings here at the 73rd annual Society of Vertebrate Paleontology meeting. [Image Gallery: Ancient Monsters of the Sea]

Megalodon could grow up to 60 feet (18 meters) long and had a bite more powerful than that of a Tyrannosaurus rex. The sea monsters terrorized the oceans from about 16 million to 2 million years ago. Though that may seem like a long reign, other shark species have survived for 50 million years or more without significant changes in body plan, Pimiento said.

"This species is not as successful as we think," Pimiento said. "A lot of sharks that were alive during the time of Megalodon are still around today."

"Body size affects nearly every aspect of an organism's biology and ecology," Pimiento told LiveScience. "When you have a very large organism like Megalodon, that can be very good or very bad."

Bigger animals can eat a wider range of foods and be fiercer predators than their pip-squeak pals. But because they eat more types of animals they also have more competition for those animals, and the ecosystem can support a lower population density of them since they need more resources — including space — to survive. When food supplies dwindled, these giant creatures could have had a tough time finding enough food, Pimiento said.

Pimiento went to several museums around the world and measured the tooth size of about 400 specimens of Megalodon. Based on those measurements, she estimated their final body size before extinction.

She concluded that while the size of the biggest and smallest of the animals didn't change over time, there were more of the bigger beasts during the later periods of its evolution.

It's still not clear exactly why the behemoths got bigger, but Pimiento plans to look at climate data and information on other species to tease that out.

"Perhaps something was going on with the productivity and climate that produced that pattern, or with their prey and their competitors that made the species become large," Pimiento said.

Either way, being so huge may have made them more vulnerable to extinction. Though the mega-sharks died off, their close relatives — great white sharks — still terrorize the seas today.

"The possible body size increase in the megalodon lineage over geologic time will need to be tested further by examining megalodon collections throughout the world, but the idea is important to understand the rise and extinction of the top predator lineage that must have had a significant impact to the ocean ecology," said Kenshu Shimada, a paleobiologist at DePaul University in Chicago, who was not involved in the study.