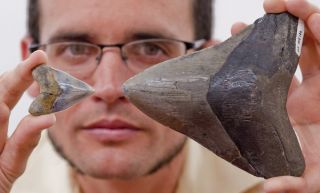 Dana Ehret, compares the size juvenile megalodon (on the left) with that of an adult megalodon tooth (the much larger one on the right).
(Image: © Florida Museum of Natural History photo by Jeff Gage)

The researchers, from the Florida Museum of Natural History, discovered a fossilized site that seems to be a 10-million-year-old nursery area maintained by the extinct megalodon shark, Carcharocles megalodon, in Panama. The site provides fossil evidence that the sharks, for millions of years, used those types of areas to protect their young. The researchers say the site is the first documented paleo-nursery area for megalodons from the Neotropics. Ehret is a co-author of the study, which was published in May 2010 the journal PLoS ONE.

"The study provides evidence of megalodon behavior in the fossil record," study researcher Catalina Pimiento said. She just completed a master’s degree in zoology from the University of Florida and worked in the Florida Museum's vertebrate paleontology division. "Behavior doesn’t fossilize, but we were able to interpret ancient protection strategies used by extinct sharks based on the fossil record."

The scientists and their colleagues at the Panama Canal Project Field Team of the Smithsonian Tropical Research Institute collected 400 fossil shark teeth between 2007 and 2009 from the shallow marine Gatun Formation, which connected the Pacific Ocean to the Caribbean Sea during the late Miocene Epoch in Panama.

According to Pimiento, although the megalodon was the biggest shark that ever lived based on the fossil record, most of the 28 megalodon tooth specimens were surprisingly small. These tiny teeth suggest that megalodons they found in Gaun were mostly juveniles and neonates between 6.5 and 35 feet (2 and 10.5 meters) in body length. Analysis determined that the small body size of the megalodon did not relate to the tooth position in the jaw or the small population of the species during the late Miocene.

The evidence of such young megalodons suggests that megalodon nursery areas existed. This is contrary to the belief that megalodons did not need nursery areas to protect their young because they were the largest shark species. Nurseries provided significant advantages such as ample food resources, and the shallow water helped to protect juveniles and neonates from predators, such as adult sharks of different species.

The teeth from the study are now located in the Smithsonian Tropical Research Institute and the Florida Museum of Natural History. The Florida Museum also houses the Florida Program for Shark Research and International Shark Attack File, and it created the traveling exhibit Megalodon: Largest Shark that Ever Lived.

Editor's Note:Any opinions, findings, and conclusions or recommendations expressed in this material are those of the author and do not necessarily reflect the views of the National Science Foundation. See the Research in Action archive.