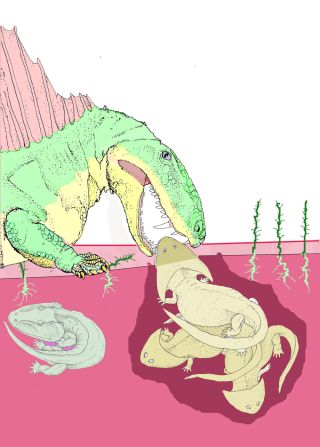 An illustration of Dimetrodon extracting an unfortunate boomerang-head amphibian from its burrow. Shed teeth mingled with amphibian bones reveal that the fin-back ate these strange burrowing creatures in the Permian period.
(Image: © Robert Bakker.)

DENVER — Talk about a creature feature: A bizarre boomerang-headed amphibian that burrowed in a seasonal pond in what is now Texas often met its doom in the jaws of a reptilian fin-backed mammalian ancestor, new fossils reveal.

These two weird critters were residents of the Permian period 298 million to 250 million years ago, before dinosaurs roamed the Earth. Dimetrodon, the jaguar-size finback, looked like a lizard but was actually more closely related to modern mammals. Diplocaulus, the boomerang-head, was a truly strange amphibian with an impractically wide, bony skull.

"It's just so weird," said study researcher Robert Bakker, the curator of paleontology at the Houston Museum of Natural Science. "This is an example of unintelligent design." [Images of the Bizarre Boomerang-Head & Finned Monster]

Unintelligent though a broad head may have been for a burrowing creature, the boomerang-head managed to survive for 45 million years during the Permian, a period known for its extinctions, Bakker told LiveScience.

Bakker and his colleagues discovered the Dimetrodon and Diplocaulus interaction in the Craddock bone bed in Baylor County, Texas. The bone bed is scattered with the bodies of boomerang-heads, curled in what were once burrows. The amphibians seem to have burrowed into the mud to survive the dry season, the researchers reported here Monday (Oct. 28) at the annual meeting of the Geological Society of America.

"The bed had a reputation of just being a stewpot with everything mixed together," Bakker said. "That's totally wrong. It's beautifully layered."

The excavations revealed that boomerang-heads were common in the pond — and that something was snacking on them.

"We have hundreds of these, mostly chewed, and even the guys in burrows got attacked," Bakker said.

The shed teeth, "like bullets in a crime scene," revealed the attacker to be Dimetrodon, he said. The finback's sharp fangs and long snout would have enabled it to bite boomerang-heads hiding in burrows, perhaps after partially excavating them with its sharp, digging claws.

One cluster of eight juvenile boomerang-heads was found stacked together, suggesting they all occupied the same burrow. Dimetrodon likely killed the top three, including one whose nose was bitten clean off (taking part of the brain with it). The other five boomerang-heads survived the Dimetrodon, only to perish during the next dry season, Bakker said.

The find corroborates a theory first posited by famed paleontologist E. C. Olson, who argued that Dimetrodon must have eaten the boomerang-headed amphibians.

"[Dimetrodons are] the equivalent of Velociraptor and T. rex, you'd think they'd be eating big plant-eaters," Bakker said. But there weren't many big plant-eaters in the Permian era, so Dimetrodon ate smaller amphibians instead. (The largest Diplocaulus skull ever found measured about 17 inches (43 centimeters) across, Bakker said.)