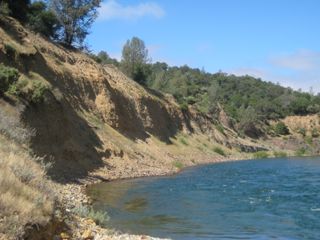 Sediments like these along the Yuba River in northern California can be eroded by large floods, unleashing mercury pollution into the water.
(Image: © Michael Singer )

Even though the California Gold Rush took place more than a century ago, it left a toxic legacy of mercury pollution that will continue to be a problem for some time, scientists say.

New research shows that gold mining in the Sierra Nevada mountains between 1848 and 1884 left tons and tons of mercury-contaminated sediments in river valleys downstream, such as the Yuba River valley. About once a decade, large floods lose enough of this sediment to create a spike in mercury concentrations downriver and in the San Francisco Bay, said Michael Singer, a geologist and hydrologist with joint appointments at Scotland's University of St. Andrews and the University of California, Santa Barbara.

"This is a big deal because at the moment, there's quite a bit of mercury contamination that's in the ecosystems of the [San Francisco] Bay and Sacramento Delta," Singer told LiveScience.

Going up the food chain

It was previously thought that most of the mercury from this mining, much of which took place more than 150 years ago, had already exited the river system, Singer said. But a study by Singer and colleagues published this week in the journal Proceedings of the National Academy of Sciences showed this isn't the case. Instead, the study found that there is enough mercury-contaminated sediment to significantly add to levels of the heavy metal downriver and in the San Francisco Bay for the next 10,000 years. The sediment is washed away by large floods but also by the meandering of the river, which curves back and forth within its valley and exposes long-buried, polluted dirt, he added.

When the mercury reaches the lowlands of the Sacramento-San Joaquin River Delta, where the Yuba River and other streams that flow out of the Sierra Nevada end up, it can be converted to methylmercury by microbes. Methylmercury is the organic form of the heavy metal, which can accumulate in animals and make its way up the food chain, Singer said.

As larger animals eat smaller ones and are, in turn, eaten by even bigger creatures, mercury accumulates and increases in concentration. For this reason, predatory fish like bass and salmon in the Bay have been found to have high levels of mercury, Singer said.

This amount of mercury pollution is "already significant, and what the authors show is that it's going to get worse," said Manny Gabet, a geologist at San Jose State University who wasn't involved in the study. [World's 10 Most Polluted Places]

Gold-rush miners sought gold by eroding entire hillsides with high-pressure water cannons, contrary to popular conceptions of panning for gold, Gabet told LiveScience. The sediment was then run through "sluice boxes," where mercury was added to bind to gold. But large quantities of the heavy metal made their way into sediment downstream. This destructive mining filled valleys with sediments that caused flooding in California's Central Valley, and in 1884, the federal government shut down much of this gold-mining activity, Singer said.

It's hard to imagine that the problem can easily be solved in the near term, because there is probably just too much mercury-tainted sediment to feasibly move, Singer said. Perhaps the sediment could be trapped in the event of large floods, or measures could be taken to prevent particularly contaminated sections of sediments from eroding, such as along the Yuba River, he said.

The study suggests that lingering mercury pollution could be a problem in other areas where gold is currently being mined, especially in mountains.

"Unfortunately, gravity is on the side of future contamination," as floods will eventually move mercury-tainted soils downward in California and elsewhere, Singer said.