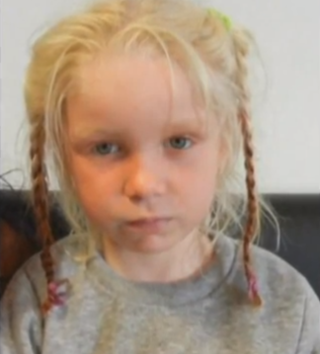 The young girl allegedly kidnapped by a Greek Roma couple may have come from dark-eyed, dark-haired parents.
(Image: © Youtube screenshot from greenguitarmon)

A Roma couple in Greece was charged last week with abducting a young girl who was found living with them. What made authorities suspect the girl wasn't the? Her blond hair and blue eyes.

The Greek Roma man and woman both have brown hair and brown eyes. The Roma — sometimes referred to as gypsies, although the term is now considered derogatory — are part of an ethnic group who live mostly in central and eastern Europe. DNA tests showed the girl is not biologically related to the Roma couple, or to anyone in Interpol's global database of missing people, NBC reported.

However, genetics easily explains how brown-eyed, brunette parents could produce a child with blond hair and blue eyes.

It's definitely possible, said Rick Sturm, a molecular biologist at the University of Queensland in Australia. "It would not surprise me that two Roma parents may have a blue-eyed child," Sturm said. [Genetics By the Numbers: 10 Tantalizing Tales]

Eye-color genes specify how much pigment, called melanin, is in the circular outer structure of the eye, or iris. Brown eyes result from an abundance of melanin, whereas blue eyes result from reduced or absent levels of melanin. The eyes appear blue for the same reason the sky does — blue light is scattered, while other colors are absorbed.

As for the case of the blue-eyed mystery girl, DNA tests now confirm a Bulgarian Roma couple are the girl's biological parents, the BBC reported.

"Most Roma have brown hair and eyes, but there are many blond Roma with blue eyes," said Juan Gamella, a social anthropologist at the University of Granada in Spain.

Gamella noted that he finds the attention the case has received troubling.

"For centuries, Roma have been falsely accused of stealing children," Gamella told LiveScience. "In fact, it has been Roma children who have been taken forcefully away from their parents, often by false allegations of bad parenting."

Editor's Note: This article was updated at 1:44 p.m. ET on Oct. 25 to report that the girl's biological parents have been confirmed.