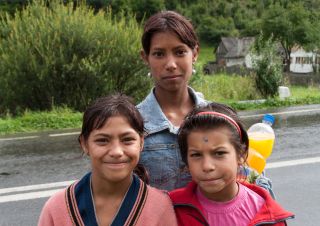 Three unidentified Roma girls in Romania. The Roma constitute one of the largest minorities in Romania.
(Image: © dinosmichail / Shutterstock.com)

Facts about the Roma

Their names are as diverse as their populations are widespread: Often called the Roma or the Romani people, this minority group is also known as gitanos in Spain, as gitan in France, as Tsingani in Central and Eastern Europe, and by several names across Scandinavia that translate as "Travelers." Roma also refer to themselves by various names: Kale in Finland and Portugal, Manush in France, and Sinti in Germany and Eastern Europe.

Historically, in nearly every country where the Roma have lived, they have also been referred to as gypsies, a derogatory term used to describe an ethnic group that has migrated throughout the world over the course of several centuries.

The Roma have one of the most dramatic stories in human history, but few people know their ancient tale of travel, persecution and survival. Here are five intriguing facts about the Romani people:

The Roma originated in India

Linguistic analysis suggests that the Roma are originally a Hindi people from northern India. Many of the words and grammatical rules of the Romani language are virtually identical to those of the Hindi language. [Top 10 Mysteries of the First Humans]

Genetic evidence also suggests that Romani people may have originated in northern India. A 2012 study, published in the journal Cell Biology, analyzed genomic data from 13 Romani communities across Europe. The researchers concluded that the Roma people left northern India about 1,500 years ago; those Roma now in Europe migrated through the Balkans starting about 900 years ago. These findings support written reports of Roma groups arriving in medieval Europe in the 1100s.

There are about 12 million Roma worldwide

After leaving northern India, most Romani went to Europe: In some Eastern European countries, such as Romania and Bulgaria, they form up to 12 percent of the total population. The Roma are also numerous in Turkey, which has about 2.75 million Romani, according to The New York Times: Other European countries with large Roma populations include Russia, Slovakia, Hungary, Serbia, Spain and France.

Though concentrated in Europe, there are also Romani populations on every occupied continent — about 1 million live in the United States, and roughly 800,000 in Brazil. But no matter where they go, the Roma have faced discrimination and persecution.

Shortly after arriving in Europe, the Romani were enslaved in many regions, a cultural heritage that continued into the 19th century in countries like Romania. In England, Switzerland and Denmark, the Romani were put to death throughout the medieval era. Many countries, such as Germany, Italy and Portugal, ordered the expulsion of all Romani.

There are countless reports of Roma children being abducted from their parents, women who had their ears cut off, and Romani who were branded with hot irons. In an effort to force assimilation, the use of their native language was forbidden in some countries; other places forbade the Roma to marry among themselves.

Perhaps the most devastating persecution of the Romani occurred during World War II, when they were among the first targets of Nazi atrocities, according to the BBC. An estimated 2 million Romani died in concentration camps and through other means of extermination. [7 Absolutely Evil Medical Experiments]

In the post-war era, the Romani remained an oppressed group, especially in the Soviet Union. As recently as the 1980s, Roma women in Czechoslovakia were forced to undergo sterilization to limit the Romani population.

Roma culture is rich and fascinating

The Romani are often celebrated for their musical heritage, which has influenced jazz, bolero and flamenco music, as well as classical composers including Franz Liszt. The original traveling Romani populations supported themselves as performers, artisans and tradespeople, according to the Roma Support Group (RSG) an organization created by Roma people to promote awareness of Romani traditions and culture.

While it's believed that the Roma were originally Hindu, over the centuries, most Romani have adopted the religions of their host countries. The majority of Roma communities now practice a form of Islam or Christianity that retains some Romani influences.

Many Romani still face persecution and discrimination, and are denied rights and services in the countries where they live. Authorities in Italy have denied housing to Roma families — even those born in Italy — on the grounds that people living in cheap, makeshift metal containers in isolated Roma camps already have permanent housing, according to the Guardian.

And in 2013, about 10,000 Roma were expelled from France after their camps were destroyed, according to the Baltimore Sun.

However, recent decades have also seen Roma organizations and individuals working to secure rights for Roma worldwide, to preserve Roma traditions and culture, and to provide resources for Roma communities. For example, the Roma Education Fund supports education programs to assist Romani students and to help integrate Roma into education systems worldwide that have historically excluded them. And Hungarian politician and Romani activist Ágnes Osztolykán received the 2011 International Women of Courage Award from the U.S. State Department, recognizing her efforts promoting Roma recognition and rights in Hungary.