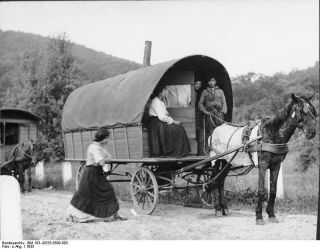 Romani with their wagon, photographed in the Rheinland of Germany in 1935.
(Image: © Bundesarchiv, Bild 183-J0525-0500-003 / CC-BY-SA, distributed under a Creative Commons license (German Federal Archives))

The Romani, also known as the Roma, were originally dubbed "gypsies" in the 16th century, because this widely dispersed group of people were first thought to have come from Egypt. Today, many consider "gypsy" to be a derogatory term.

Since the advent of better and better genetic technology, researchers have analyzed the genetic history of much of Europe, finding, for example, the history of the Jewish Diaspora written in DNA. But though there are 11 million Romani in Europe, their history has been neglected, said study researcher David Comas of the Institut de Biologia Evolutiva at Universitat Pompeu Fabra in Spain

Linguistic history as well as a few limited genetic studies had already suggested the Romani originally hailed from India. To confirm this idea and uncover more details on the migration, Comas and his colleagues used a technique that compares DNA segments from across the whole genome with that of other populations. They used DNA samples from 13 groups of Romani spread across Europe.

"In our study, we do not focus on specific regions of the genome, but on the genome as a whole, which provides us the complete genetic information of the populations under study," he told LiveScience.

The results revealed the modern Romani's ancestors migrated out of northwest India all at one time 1,500 years ago, Comas and his colleagues report today (Dec. 6) in the journal Current Biology. Once they arrived in Europe, they spread across the continent from the Balkan region about 900 years ago, Comas said.

Over hundreds of years of history, intermarriage between Romani people and local populations has waxed and waned, Comas said. They have often been discriminated against; during the Holocaust, somewhere between 200,000 and 1.5 million Romani were killed by Hitler's Nazis. After World War II, Romani in communist nations were often targeted for "assimilation," which sometimes meant forced sterilization to lower their birth rate. [7 Absolutely Evil Medical Experiments]

Comas said he hoped to later widen the analysis to include more Romani groups as well as more Indian populations from the region where the Romani originated.