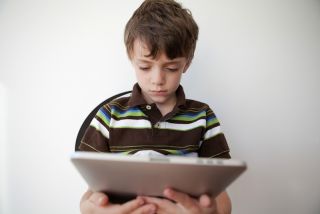 Withdrawal symptoms and cravings may seem like the province of hard-drug addiction, but increasingly, psychologists are noticing these same signs of addiction in people who use devices ranging from smartphones to tablets.

And as more and more households get iPads, more children may start to get hooked.  In April, reporters pounced on a story about a 4-year-old who was seeing a therapist to kick her iPad obsession.

Though diagnosing a 4-year-old may be a stretch, "with what we're learning about addictions, it is fair to say that somebody can become addicted to an iPad," said Oren Amitay, a psychologist in Toronto.

The Diagnostic and Statistical Manual of Mental Disorders V (DSM-V), sometimes called the psychiatrist's "bible," has not officially added Internet gaming to its roster of disorders, but it's under consideration. And it's likely that iPad, smartphone or other device addiction will be viewed similarly as more data show their harmful effects, Amitay said. [Top 10 Controversial Psychiatric Disorders]

From physical withdrawal symptoms to losing touch with the outside world, here are seven signs your child may be hooked on the iPad.

Withdrawal from heroin or alcohol causes headaches and the shakes, but device addiction has physical withdrawal symptoms as well. In a 2011 study, researchers asked 1,000 college students around the world to go 24 hours without using their smartphones, other mobile devices or the Internet. Many reported symptoms such as anxiety and depression, and one anonymous student even said he or she was "itching like a crackhead" from the longing to use a phone.

If your child is irritable, anxious or sad after having the iPad is taken away, he or she may have an unhealthy attachment to the device.

Just as heroin addicts need bigger and bigger hits to get the same effect, iPad users can also develop a tolerance.

"Kids might have enjoyed it for 10 minutes, now they need it for an hour or two hours or three," Amitay said.

If playing 20 minutes of Math Ninja or Subway Surfer is no longer enough to make a kid happy, that may also be a sign of addiction.

If children who once loved playing soccer, picking on their kid brother, or climbing trees have lost interest in all those activities in favor of hours of "Air Hockey Gold," it may signal a problem. (An occasional preference for the iPad over other activities isn't a problem; the screen craving has to be crowding out everything else to a significant degree.)

Addicts typically have an inability to control their usage. And though 4-year-olds are not known for their self-control, children may have a problem if parents have a really hard time taking the tablet away from their child without a huge meltdown.

On the other hand, parents of young children should be able to set limits, and a young child throwing a temper tantrum is not a sign of addiction on its own, Amitay said. [Tech Tantrums: 6 Things Parents Need to Know]

Have you caught Henry hiding underneath the kitchen table hunched over a lit-up screen, playing his favorite game? Yes, another red flag of addiction is children lying about iPad use, sneaking the iPad into their bedroom or other hideout, or otherwise deceiving family members to get more screen time.

Addicts often use a substance or an activity as a way of escaping from a negative mood or feeling.

"Whether it's sex, drugs or gambling, it's about other feelings that they can't control," Amitay said.

Losing significant relationships, failing in school, or performing poorly at work are all signs of addiction. Though young children have probably not lost their shot at the corner office as a result of too much Candy Crush Saga, they may be losing friends or their grades may be slipping.

"The idea is that the child is detaching from the world around them," Amitay said.

For all these symptoms, it's important to note that mentally healthy children, especially young children, become slightly obsessive about any new activity.

"When a child s learning to master their environment, or trying to get good at something, it's okay for them to spend a lot of time on it," Amitay said.

In young children especially, most symptoms of iPad addiction can be short-circuited early on if parents set limits, create consequences for excessive use and provide daily structure for their children. The fact that parents have trouble taking an iPad away from a 3-year-old doesn't necessarily mean they have a toddler addict; it means the parent have trouble saying no, Amitay said.

"If parents can't intervene with a 3-year-old, good luck with a teen," he said.