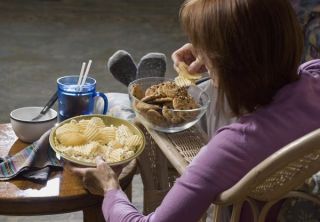 If you know a junk-food junkie with a stockpile of Twinkies in their garage, the following news might not be a big surprise: Researchers have found that quitting a diet high in fat and sugar produces changes in the brain similar to withdrawal from addictive drugs.

To the surprise of no one, the mice that scarfed down the high-fat diet increased their waist size by 11 percent at the end of the six-week study. After the mice raised on a high-fat diet were switched to a healthier one, they acted more anxious and depressed.

The researchers then examined the brains of the mice and discovered significant changes had occurred: Mice on the high-fat diet had increased levels of corticosterone — a hormone associated with stress — and CREB, a protein closely linked to dopamine functioning. Dopamine is a neurotransmitter that causes feelings of reward, and is activated by (among other things) addictive drugs like cocaine and methamphetamine.

The result, explained researchers in the Huffington Post article, is that many people who quit eating sugary, high-fat foods soon return to an unhealthy diet of junk food.

"This explains both the depression and the negative behavior cycle," said researcher Dr. Stephanie Fulton of the University of Montreal, as quoted in the Huffington Post. "The chemicals changed by the diet are associated with depression. A change of diet then causes withdrawal symptoms and a greater sensitivity to stressful situations, launching a vicious cycle of poor eating."