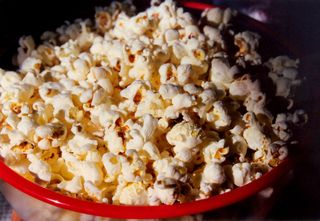 Getting into the habit of eating a certain snack while watching TV or some other activity could lead to mindless eating even when a person is full and even if the junk food tastes bad, a new study suggests.

The good news is the researchers have also found a way to override these eating habits.

"When we've repeatedly eaten a particular food in a particular environment, our brain comes to associate the food with that environment and make us keep eating as long as those environmental cues are present," study researcher David Neal, a psychology professor at University of Southern California, said in a statement.

In one experiment, scientists at the university handed out popcorn to people who were about to enter a movie theater. Participants either received a bucket of just-popped, fresh popcorn or stale, week-old popcorn.

The findings showed that participants who indicated they typically ate popcorn at the movies consumed about the same amount of popcorn, whether it was fresh or stale. [Top 10 Good Foods Gone Bad]

"People believe their eating behavior is largely activated by how food tastes. Nobody likes cold, spongy, week-old popcorn," said study researcher Wendy Wood, a professor of psychology and business at USC. "But once we've formed an eating habit, we no longer care whether the food tastes good. We'll eat exactly the same amount, whether it's fresh or stale."

Those participants who indicated they didn't usually eat popcorn at the movies ate much less stale popcorn than fresh popcorn.

A control group ate fresh or stale popcorn while watching movie clips in a meeting room. Without the theater setting acting as an eating trigger, even the habitual movie-popcorn eaters consumed much less stale than fresh popcorn.

This suggests that, because a meeting room is a space that is not usually associated with eating popcorn, the subjects paid more attention to the taste of the food, rather than just absentmindedly eating out of habit.

"The results show just how powerful our environment can be in triggering unhealthy behavior," Neal said.

Thankfully, researchers found a way to put an end to routine, "mindless eating" habits that doesn't require changing an eating environment. Simply disrupting automatic eating is enough to make a person become more aware of what — and how much — they are eating.

In a separate experiment, researchers once again gave participants stale and fresh popcorn before they entered a theater for a movie screening. The subjects were asked to eat the popcorn with either their dominant or nondominant hand. The moviegoers who used their nondominant hand ate much less of the stale than the fresh popcorn. This technique even worked on participants with strong movie-popcorn eating habits.

"It's not always feasible for dieters to avoid or alter the environments in which they typically overeat," Wood said. "More feasible, perhaps, is for dieters to actively disrupt the established patterns of how they eat through simple techniques, such as switching the hand they use to eat."

The study was published in the current issue of the journal Personality and Social Psychology Bulletin.