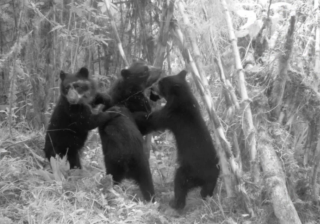 These Andean bears don't like having their picture taken.
(Image: © WCS)

In the tradition of Alec Baldwin and Sean Penn, Andean bears aren't afraid to stand up to the glaring camera lens of the paparazzi.

In the protected jungles of Bolivia, the bears have dismantled camera traps designed to surreptitiously snap pictures of the creatures in their natural environment. But like the most famous celebrity paparazzi scuffles, there were thankfully other cameras around to capture the whole thing.

"Andean bears are very curious animals. But they are also very strong, and the cameras are like big flashing toys," Lilian Painter, director of the Wildlife Conservation Society's division in Bolivia, said in a statement.

For decades, camera traps have served as a useful tool for researchers to collect data on wild animals without actually being in the field. Though the cameras are less invasive than the presence of a khaki-clad biologist, the devices are not always discreet. The cameras are often triggered by a motion detector and use flash as they snap pictures of the creatures crossing their field of view. The arrangement sometimes doesn't sit well with animals. Camera-shy elephants, for example, have been known to trample the traps set up to capture images of tigers in India.

As two new series of images demonstrate, several Andean bears have turned on the camera traps set up in the Bolivian jungle. In one case, a persistent bear is shown successfully tearing open the device and leaving it dangling. In the second incident, a mother and her two cubs go at camera trap together. Cameras set up on other nearby trees captured footage of both incidents.

Painter said the camera traps were still able to record important images that could improve researchers' understanding of the bears' distribution, abundance and behavior.

The Andean bear (Tremarctos ornatus), sometimes called the spectacled bear, is the only bear species that lives in South America, where it is found throughout the Andes in Venezuela and Columbia, as well as the coastal foothills of Ecuador, Peru and Bolivia. The bears face threats to their natural habitat, including road construction, logging, unsustainable natural resource use and agricultural expansion, conservationists say.

In Bolivia, Andeans bears have found shelter in the largely unspoiled cloud forests across three national protected areas: Apolobamba, Madidi and Pilon Lajas, according to the Wildlife Conservation Society. The new images released by WCS were captured in Apolobamba.