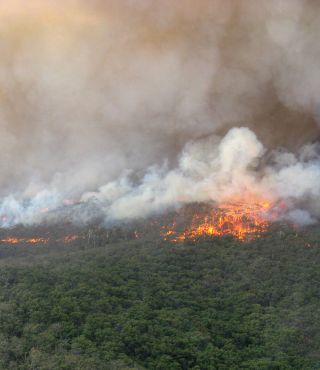 About 100 bushfires raging in New South Wales, Australia's most populated state, forced thousands of people to flee their homes yesterday. Smoke and ash drifted into Syndey on Thursday, casting a yellow pall over the famed Syndey Opera House.

Unseasonably warm temperatures and strong winds fanned the flames, according to news reports. The extreme weather followed a dry, warm winter. There were no reports of deaths, but the extent of damage is unknown, because some fires are too intense for firefighters to safely battle the 'catatrosphic' blazes, the Syndey Morning Herald reported. More than 30 fires were burning out of control on Thursday night, and several hundred homes may have been destroyed.