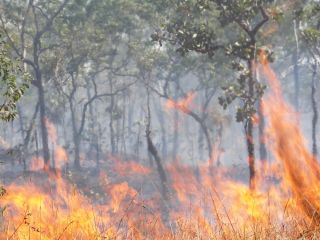 Human-caused global warming played a role in making this past summer Australia's hottest on record, a new study suggests.

The summer of 2012-2013 probably won't retain its title for long; researchers say record-breaking scorching summers are five times more likely to occur now in Australia due to climate change.

"Our research has shown that, due to greenhouse gas emissions, these types of extreme summers will become even more frequent and more severe in the future," study author Sophie Lewis of the University of Melbourne said in a statement.

Australia's summer occurs from December to February, during the Northern Hemisphere's winter. In those three months between 2012 and 2013, the country's average temperature was 83.5 degrees Fahrenheit (28.6 degrees Celsius), 2 degrees F (1 degree C) above normal, according to Australia's Bureau of Meteorology. It broke the previous summer temperature record, set in the 1997-1998 season, by 0.18 degree F (0.1 degree C). Unusually high temperatures gripped nearly the entire country, with just three percent of Australia experiencing below-normal temperatures. Bush fires and flooding, combined with the extreme heat, prompted Australians to call it the "angry summer."

Lewis and colleagues looked at climate observations and more than 90 climate model simulations of summer temperatures in Australia over the past 100 years. They found that human influences likely stoked the record heat during a summer when Australians may have otherwise expected cooler temperatures.

"This extreme summer is not only remarkable for its record-breaking nature but also because it occurred at a time of weak La Niña to neutral conditions, which generally produce cooler summers," Karoly said. "Importantly, our research shows the natural variability of El Niño Southern Oscillation is unlikely to explain the recent record temperatures." The El Niño Southern Oscillation is a climate cycle that can impact weather and cliamte systems around the globe; it's El Niño phases features warmer-than-normal sea surface temperatures in the tropical Pacific Ocean, while the La Niña phase features cooler-than-normal temperatures.

Climate describes weather that occurs over long periods, such as decades, centuries or millennia, and scientists are typically quick to point out that no individual storm, heat wave or unusual season can be directly blamed on climate change. But researchers have said that global warming can make some events, on average, more severe and more frequent than they would have been in the past.

The research has been accepted for publication in the journal Geophysical Research Letters.