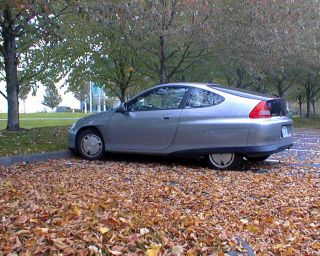 More than half of all Americans say they would seriously consider buying or leasing a fuel-saving hybrid car, according to a new poll.

Price is the obstacle for many, however.

The CNN/USA Today/Gallup poll found 48 percent of Americans have cut back significantly on the amount they drive because of higher gas prices. The figure is 59 percent for those living in households earning less than $50,000 per year and 36 percent for those making $50,000 or more.

More than half of all Americans (54 percent) said they have reduced household spending on other items because of high gas prices.

Hybrids, meanwhile, aren't selling because of the added cost, even though 57 percent of those polled said they would seriously consider one.

Ford Motor Company is now offering zero-percent financing on its Ford Escape SUV hybrid because of slower-than-expected sales, the Gallup organization points out. The vehicle's base price is $26,900, whereas the regular Escape starts at $19,380.

Among poll respondents age 18 to 49, 64 percent said they'd consider a hybrid, while only 39 percent of people 65 and older would.

The telephone poll of 1,001 adults was done March 10-12 and released today. It has a margin of error of ±3 percentage points.