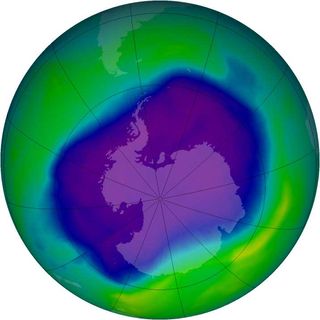 The Montreal Protocol, adopted in 1987, is showing success at removing ozone-depleting substances from the atmosphere, a NASA scientist says, with ozone levels projected to return to 1980 levels by 2032. (Shown here a Sept. 24, 2006, image of the Antarctic ozone hole, with blue and purple representing the least protective ozone; greens, yellows and reds signaling more ozone.)
(Image: © NASA)

The infamous hole in the ozone layer above Antarctica may have caused warming in southern Africa over the past two decades, researchers say.

However, as the hole in the ozone layer continues to shrink due to international policies that limit the chemicals that eat away at the ozone, temperatures may cool down in southern Africa, the study researchers also said.

Ozone is a cousin to the oxygen molecules people breathe, consisting of three atoms of oxygen instead of the regular oxygen molecule's two. This gas is concentrated in a layer about 12 to 19 miles (20 to 30 kilometers) above Earth's surface. This ozone layer absorbs most of the ultraviolet light from the sun, helping to defend people against sunburns and skin cancer.

Since the early 1980s, when it was first noticed, a hole in the ozone layer opens up over Antarctica every year, decreasing ozone concentrations there by as much as 70 percent. The cause is human-produced chlorofluorocarbons (CFCs), which once were heavily used in aerosols and refrigeration.

Now, researchers have found that the ozone hole may be linked to warming in southern Africa.

"At first, connecting the two [ideas] appeared quite absurd, and it never occurred to us until we carefully looked at the pointers in the data," said study lead author Desmond Manatsa, a climate scientist at Bindura University of Science in Zimbabwe.

Previously, scientists found that surface air temperatures in southern Africa had risen significantly over the past two decades, mostly in the early summer. Investigators had suggested this heating was due to the global warming caused by human-linked greenhouse-gas emissions changing climate around the planet. However, climate models hinted that global-warming effects from greenhouse gases should not differ between seasons in southern Africa, but instead be uniform throughout the year, Manatsa explained.

Scientists recently found that the ozone hole might help boost global warming slightly. By letting more energy penetrate deeper into the atmosphere, the ozone hole apparently shifted wind patterns over Antarctica. This shift pushed clouds closer to the South Pole, affecting how much of the sun's radiation the clouds reflect and, in turn, slightly warming the planet.

"The development of the ozone hole could, in fact, be the dominant cause of the increase in temperature over southern Africa," Manatsa told LiveScience.

On average, the rise in temperature in southern Africa "is characterized by a shift of about 1 degree C[elsius] from the time before the development of the large ozone hole to the period after," Manatsa wrote in an email. (A change of 1 degree Celsius is equal to a change of 1.8 degrees Fahrenheit.) The ozone hole is largest in the early summer, coinciding with the recent warming in southern Africa.

International agreements have helped phase CFCs out of use. Satellite observations have revealed this action has had real effects on the ozone layer: In 2012, the hole in the ozone layer over Antarctica was smaller than it had been in the previous 10 years. The new research from Manatsa and his colleagues now suggests that, if the Antarctic ozone hole closes after 2050, as it is currently projected to do, surface air temperatures could drop in southern Africa, though global warming will still affect the region.