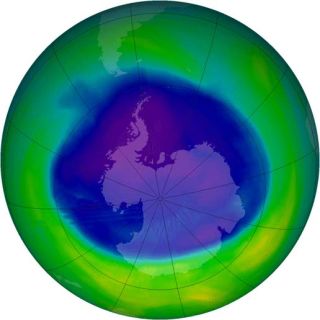 The ozone hole over the Antarctic is likely to begin contracting in the future and might disappear by 2050 because of a reduction in the release of chlorofluorocarbons and other ozone-depleting gases, according to a team of Japanese scientists.

That would be a good thing. Ozone in the upper atmosphere shields the planet from excess ratiation. The hole, monitored by satellites and ground stations since its discovery in the 1980s. is an area of depleted ozone, thought to have been created by chlorofluorocarbons released into the atmosphere.

Chlorofluorocarbon levels in the Earth's atmosphere have been declining since the mid-1990s due to international efforts to reduce emissions.

The new findings are based on a series of numerical simulations carried out by Eiji Akiyoshi of the National Institute for Environmental Studies, near Tokyo, using projected emissions of chlorofluorocarbons and other gases blamed for the ozone hole.

According to a report posted Friday on the institute's Web site, the hole is at its largest now but is likely to gradually start contracting around 2020 and disappear by around 2050.

The team's findings are in line with research by other scientists, including a favorable outlook from U.S. scientists published in the journal Nature earlier this month.

Some, however, have suggested the hole won't heal until much later because old refrigerators and air-conditioning systems—many in the United States and Canada _ are still releasing ozone-killing chemicals. Both countries curbed those chemicals in newer products.

The Associated Press and LiveScience Staff contributed to this report.