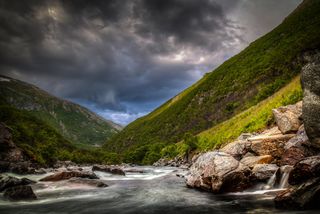 A quiet editorial revolution may have begun, which could bring facts beyond dispute back into the realm of mainstream media discussions about big, complicated issues like Obamacare and climate change — issues that can be confused with deliberate, and well-placed, seeds of doubt.

Newspaper and magazine editors are calling out deniers — including members of Congress — who ignore scientifically and economically accurate facts when it's convenient to do so. And those editors are refusing to print pieces, including letters to the editor, that are based on falsehoods. It's about time.

The most recent example of this is the sudden media spotlight shone on U.S. Rep. Ted Yoho, a freshman Republican congressman from Florida, who quite amazingly told reporters that it was perfectly fine for the U.S. government to default on its debt for the first time in history because he'd done something akin to that when he ran his large veterinary practice before winning a seat in Congress.

Never mind that every economic leader in the world says that a U.S. government debt-default would be catastrophic and cause irrevocable harm to the global economy.

"Everybody talks about how destabilizing doing this will be on the markets," Yoho said in The New York Times. "And you'll see that initially, but heck, I've seen that in my business. When you go through that, and you address the problem and you address your creditors and say, 'Listen, we're going to pay you. We're just not going to pay you today, but we're going to pay you with interest, and we will pay everybody that's due money' — if you did that, the world would say America is finally addressing their problem."

No, editors all across the United States said as they included his comments in their coverage of the brinksmanship over the government shutdown and the debt ceiling.

Some editors are taking it a step further. Two recent developments are clear indications of this trend.

First, the letters editor of the Los Angeles Times wrote on October 5th that he doesn't publish letters to the editor that ignore established, indisputable facts about issues such as climate change and health care reform.

"Numerous readers have written The Times to criticize President Obama and congressional Democrats for championing an unpopular healthcare reformlaw while, the writers say, exempting themselves from it," wrote Paul Thornton. "Regular readers of The Times' Opinion pages will know that, among the few letters published over the last week that have blamed the Democrats for the government shutdown (a preponderance faulted House Republicans), none made the argument about Congress exempting itself from Obamacare. Why? Simply put, this objection to the president's healthcare law is based on a falsehood, and letters that have an untrue basis (for example, ones that say there's no sign humans have caused climate change) do not get printed."

After the predictable uproar in the blogosphere, Thornton took a second bite of the apple. "As for letters on climate change, we do get plenty from those who deny global warming," he wrote in a follow up piece October 8th to explain his decision. "And to say they 'deny' it might be an understatement: Many say climate change is a hoax, a scheme by liberals to curtail personal freedom.

"Before going into some detail about why these letters don't make it into our pages, I'll concede that, aside from my easily passing the Advanced Placement biology exam in high school, my science credentials are lacking. I'm no expert when it comes to our planet's complex climate processes or any scientific field. Consequently, when deciding which letters should run among hundreds on such weighty matters as climate change, I must rely on the experts — in other words, those scientists with advanced degrees who undertake tedious research and rigorous peer review.

"And those scientists have provided ample evidence that human activity is indeed linked to climate change. Just last month, the Intergovernmental Panel on Climate Change — a body made up of the world's top climate scientists — said it was 95-precent certain that we fossil-fuel-burning humans are driving global warming. The debate right now isn't whether this evidence exists (clearly, it does) but what this evidence means for us.

"Simply put, I do my best to keep errors of fact off the letters page; when one does run, a correction is published," Thornton concluded. "Saying 'there's no sign humans have caused climate change' is not stating an opinion, it's asserting a factual inaccuracy."

Meanwhile, the editors of Popular Science magazine have taken an even bigger step. They've chosen to stop publishing comments to their science-based articles altogether because, they wrote, there is clear social-science evidence that efforts to jam public comment sections with lies, distortions and falsehoods affects readers' ability to separate fact from fiction about the content of articles.

"Comments can be bad for science. That's why … we're shutting them off," the online content editor, Suzanne LaBarre, wrote on September 21. "It wasn't a decision we made lightly. As the news arm of a 141-year-old science and technology magazine, we are as committed to fostering lively, intellectual debate as we are to spreading the word of science far and wide. The problem is when trolls and spambots overwhelm the former, diminishing our ability to do the latter.

"That is not to suggest that we are the only website in the world that attracts vexing commenters. Far from it," she wrote. "Nor is it to suggest that all, or even close to all, of our commenters are shrill, boorish specimens of the lower internet phyla. We have many delightful, thought-provoking commenters. But even a fractious minority wields enough power to skew a reader's perception of a story, recent research suggests."

Issues in a democracy need to be argued and debated. But there are also facts beyond dispute, and it's good to see editors and media leaders rediscovering this time-honored concept.

A version of this column appeared as"Indisputable Facts" inU.S. News & World Report. His most recent Op-Ed was "Is Anyone Tracking the Hurricanes During a Furlough?" The views expressed are those of the author and do not necessarily reflect the views of the publisher. This version of the article was originally published on LiveScience.