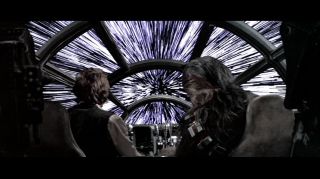 Stars are very, very, very far apart. Science fiction writers have proposed any number of super-fast propulsions to make interstellar trips about as time-consuming as flying an airplane to another country.

In "Star Trek," the technology that allows the U.S.S. Enterprise to zip about the quadrant is called a warp drive. In the "Halo" video game franchise, starships enter slipspace via a translight engine. In "Star Wars," hyperspace is accessed by a ship's hyperdrive.

Nothing, so far as we know, can travel faster than light, according to one of the pillars of modern physics, Einstein's general theory of relativity. Light moves at quite a good clip – about 186,282 miles per second, which works just fine for our everyday phone and Internet communications, in which data are carried as light pulses over fiber-optic cables. But even hurtling along at the speed of light, a space ship would take more than four years just to reach the nearest star system, Alpha Centauri. (So much for a United Federation of Planets, or a Galactic Empire.) [What Would It Be Like to Travel Faster than the Speed of Light?]

Will humans ever get to hop between the stars? Scientists do have a few intriguing areas of study that someday could yield a way to skirt or even overturn general relativity.

"I'm excited by what we’re exploring on the edge of theoretical physics," said Robert Obousy, president of Icarus International, a nonprofit foundation dedicated to achieving interstellar flight by 2100. "Certain discoveries could lead to exciting technology in the future."

Most works of science fiction have it right in implying that traveling through "normal space" at superluminal velocities appears impossible.

According to general relativity, as an object accelerates toward the speed of light, its mass increases and eventually becomes infinite. As a result, one would need infinite energy to keep chugging along at light speed, Obousy said.

Another showstopper: For a ship traveling at near-light speeds, stray, rare atoms of hydrogen gas permeating space would become hull-busting missiles. (Ever clever, "Star Trek" writers got around this issue with a path-clearing "deflector dish.")

Prepare to go to warp

A possible solution to the mass, energy and gas-missile issues might be to take space "with" you rather than try to plow through it.

General relativity says objects cannot travel faster than the speed of light as measured in local surrounding space. But the theory "places no limits on the speeds at which space itself expands or contracts," said Gerald Cleaver, a professor of physics at Baylor University.

In a nutshell, that's the general relativity-beating concept behind a lot of sci-fi starships. "It's one of the little loopholes we think we may have in circumventing the relativity of Albert Einstein," said Obousy. [The Funniest Theories in Physics]

A "warp bubble" around a ship, for instance, could make space-time itself contract in front of the ship and expand behind it.

As wild as moving space-time faster than light sounds, it may have happened before. As the Big Bang unfolded, the universe is thought to have undergone a period of "inflation," when space rapidly ballooned, an event that helps explain the cosmic structure we see today.

"It is generally believed that for a minuscule fraction of a second at the beginning of the universe, all of space did indeed expand much faster than the speed of light," said Cleaver.

Still, building a warp drive remains a distant dream. According to calculations by Obousy and Cleaver, generating a cubic-kilometer warp bubble might require incredible amounts of energy; essentially, you would need to convert all of Jupiter into pure energy.

That kind of energy-making ability is not likely to be within our grasp this century as the "Star Trek" universe would have it. If we ever develop warp drive, "I would not expect it for a significantly long time – on the tens-of-thousands-of-years time scale," said Cleaver.

Would-be space travelers need not abandon all hope. Other hints of the physics beyond our current paradigms could yet unlock the secret to FTL.

Obousy pointed to dark energy, the mysterious force discovered in the late 1990s that is accelerating the expansion of the universe.

"If we understand dark energy to a deeper level, perhaps it could be re-created or simulated artificially in a lab," Obousy said. Harnessing dark energy in some manner could allow us to manipulate space-time, as with warp, rather than be at its mercy.

Another out-there concept is learning to exploit the Higgs field, said Obousy. This field endows matter with mass through the theoretical Higgs boson, which physicists continue to hunt for at the Large Hadron Collider.

Light travels at its eponymous speed because its constituent particles, called photons, are massless. Perhaps stripping a starship of its mass (without destroying it or its passengers) could permit swift stellar voyaging.

Or perhaps we'll just have to settle for puddle-jumper flights to Mars.

Plausibility Score: Faster-than-light travel will almost certainly require new physics, as well as mind-boggling feats of engineering at incredible cost. It is not very plausible, and so it earns one out of a possible four Rocketboys.