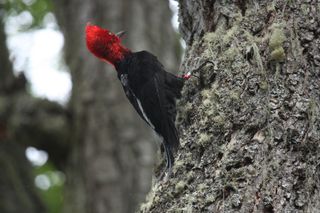 Invasive American minks may threaten the largest woodpecker species in South America, according to new research.

The Magellanic woodpecker — a relative of the extinct ivory-billed woodpecker — lives throughout the Andes of Chile and Argentina. The large birds only produce one offspring per year and maintain broad territorial boundaries of about 1 square kilometer (0.4 square miles) per male-female pair, limiting the density and growth of their population.

Still, the charismatic birds maintain stable populations by holing up in branchless, dead trees that carnivores struggle to climb. Until now, there have been no records of predation on the birds.

But researchers based at the University of North Texas in Denton and the University of Santiago in Chile report they have now found the first evidence of Magellanic predation on Navarino Island — a 955-square-mile (2,473 square kilometers) island off the coast of Southern Chile — by the American mink, a carnivore native to northern North America that was introduced to South America in the 1930s for fur farming. Minks that escaped these farms have since multiplied and have become an invasive species, without any natural predators in the region. [In Photos: The Peskiest Alien Mammals]

Though the team did not make direct observations of a mink attacking a woodpecker, they collected several pieces of evidence to argue their case, which they detailed earlier this month in the journal Biological Invasions.

For instance, the team found an adult Magellanic woodpecker — which they had outfitted with a radio-tag for an unrelated study — dead within a mink den. While it's possible a mink had found the bird already dead and scavenged it in the den, this type of behavior would be atypical of carnivores that tend to hunt live prey, said Jaime Jimenez, a researcher at the University of North Texas and a co-author on the paper.

On a separate occasion, the team observed a mink creep up on a woodpecker, looking ready to pounce at about 1 foot away (30 centimeters) until a student scared it off to prevent the attack.

And, finally, the team stationed cameras around the island, revealing footage of minks and woodpeckers feeding in the same areas of the forest floor — on separate occasions, but sometimes within minutes of each other — suggesting the animals share the same habitat. This would make the woodpeckers vulnerable to predation, if the minks had this intent.

The team thinks the woodpeckers have adapted to feed on the forest floor, rather than holing up more cautiously in trees, because they historically have had no natural predators on the island.

"They may have become naïve by not having been exposed to terrestrial carnivores," Jimenez told LiveScience. "It's very easy for a carnivore to pounce on a woodpecker and kill it."

The team believes this predation could result in a significant decline in the bird population on the island, which could result in other indirect ecological consequences, including a spike in insect populations that the birds would otherwise feed on. Other birds, including owls and parakeets, also use the Magellanic's vacated holes as breeding grounds, and may lose this important habitat if the woodpecker populations decline, Jimenez told LiveScience.

The team next plans to attach GPS units to the woodpeckers to better assess their distribution across the island and understand the ecological consequences of their potential decline, in an effort to develop management plans in response to the invasive mink population.