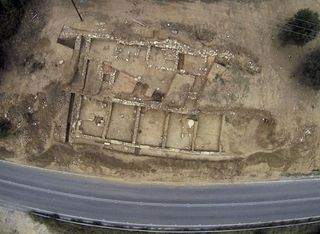 During excavations in the summer of 2013, archaeologists uncovered the portico of the ancient city of Argilos, which sits along the northern coast of the Aegean Sea in modern-day Greece. This aerial view shows the ruins that were excavated, including five of the seven storerooms that make up the portico.
(Image: © Jacques Perreault, Université de Montréal)

Along the scenic coast of the northern Aegean Sea, archaeologists have uncovered a Greek portico, which, 2,500 years ago, would have been a bustling public space, something like an ancient strip mall.

The seaside portico, or stoa, stretches 130 feet (40 meters) across with seven rooms inside, each bearing the distinct architectural touches of their ancient shop owners, the site's excavators say. Strewn about the ruins, archaeologists found coins, vases and other artifacts that hold clues to when and how people lived in the archaic city.

"Porticos are well known from the Hellenistic period, from the third to first century B.C., but earlier examples are extremely rare," archaeologist Jacques Perreault, a classicist at the University of Montreal, said in a statement. "The one from Argilos is the oldest example to date from northern Greece and is truly unique." [See Photos from the Portico Excavation at Argilos]

Perreault is a co-director of the dig at Argilos, which was strategically located just west of the Struma River, an area dotted with ancient gold and silver mines. Researchers think the city was founded around 655 B.C., making it perhaps the earliest Greek colony on the Thracian coast.

Argilos hit its stride in the fifth century B.C., but went into decline shortly after, when the nearby city Amphipolis was founded as an Athenian outpost. In 357 B.C., Philip II of Macedon conquered the region and deported the residents of Argilos to Amphipolis. Archaeologists at the site think Argilos was largely deserted after its fourth-century inhabitants were forced to leave; excavations have not turned up any Roman or Byzantine ruins from later periods, according to the dig's website.

The remains of the portico were discovered during this past summer's field season, at the edge of the city's former commercial district, about 160 feet (50 m) from the ancient port, the researchers say. The archaeologists partially dug up five of the portico's storerooms, finding curious differences in each space that suggest the building was not a city-sponsored project with one architect in charge.

"The construction techniques and the stones used are different for one room to another, hinting that several masons were used for each room," Perreault explained in a statement. "This indicates that the shop owners themselves were probably responsible for building the rooms, that 'private enterprise' and not the city was the source of this stoa."

The researchers say they have good reason to believe they'll find more in future dig seasons: A 10-foot-deep (3 m) geophysical survey showed that there are more layers of ruins underground.