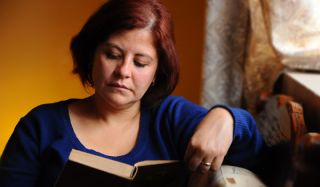 Reading a piece of fiction could enhance one's "mind-reading" skills, suggests a new study that also reveals a short story by Anton Chekhov may be more effective than a passage penned by Danielle Steel.

Researchers at the New School for Social Research in New York tested how people performed on tests that gauged their "theory of mind" capabilities after reading an except from a book or article. Theory of mind refers to a set of skills people use to understand the emotional states of other people; it can be measured, for example, through tests in which participants have to match the correct emotion to a picture of an actor's eyes.

In a series of five experiments, the team found that participants who read literary fiction in the experiments performed much better on these emotion-reading tests than those who read excerpts of non-fiction and popular fiction. [10 Surprising Facts About the Brain]

"Interestingly, this effect could not be explained statistically by changes in the emotions participants reported feeling, how familiar they were with fiction coming into the experiment, their level of education or even how much they enjoyed reading the text," study author David Comer Kidd, a doctoral student, said in a podcast from the American Association for the Advancement of Science.

For the purposes of this study, Kidd and his advisor considered literary fiction to be works that are less focused on plot and require the readers to engage their interpretive faculties to understand the feelings and thoughts of characters. In contrast, the plot and characters of popular genre fiction such as romance novels and thrillers tend to be more internally consistent and predictable, allowing the readers to be more passive.

Without a scientific metric to measure "literariness," the researchers turned to prestigious awards (like the National Book Award and 2012 PEN/O. Henry Prize) as their guide for choosing their excerpts of literary fiction. Selections included "The Runner" by Don DeLillo, "Blind Date" by Lydia Davis and "Corrie" by Alice Munro. The researchers picked their popular fiction excerpts from the Amazon.com bestsellers list and non-fiction works from Smithsonian Magazine.

Comer explained that works of literary fiction might sharpen social skills, because they draw the reader into a type of social interaction with the characters.

"What a great author does," Comer said in the podcast, "is they sort of scaffold our theory of mind activity. They help us to make inferences without pushing us to make specific inferences, but they pull us into a situation where we really have to use our capacity to understand other people to its fullest extent."

The research was published online Oct. 3 by the journal Science.