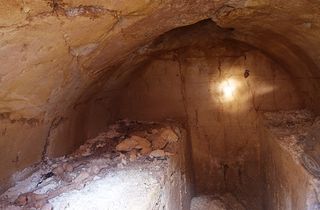 In the small vaulted chamber, the complete skeleton of an individual was resting on a stone bed on the left. A spear lay along the body, while brooches, on the chest indicated that the man was probably once dressed with a mantle.
(Image: © Massimo Legni/SBAEM/UNITO)

The skeletonized body of an Etruscan prince, possibly a relative to Tarquinius Priscus, the legendary fifth king of Rome from 616 to 579 B.C., has been brought to light in an extraordinary finding that promises to reveal new insights on one of the ancient world’s most fascinating cultures.

Found in Tarquinia, a hill town about 50 miles northwest of Rome, famous for its Etruscan art treasures, the 2,600 year old intact burial site came complete with a full array of precious grave goods.

“It’s a unique discovery, as it is extremely rare to find an inviolate Etruscan tomb of an upper-class individual. It opens up huge study opportunities on the Etruscans,” Alessandro Mandolesi, of the University of Turin, told Discovery News. Mandolesi is leading the excavation in collaboration with the Archaeological Superintendency of Southern Etruria.

A fun loving and eclectic people who among other things taught the French how to make wine, the Romans how to build roads, and introduced the art of writing into Europe, the Etruscans began to flourish around 900 B.C., and dominated much of Italy for five centuries.

Known for their art, agriculture, fine metalworking and commerce, the Etruscans begun to decline during the fifth century B.C., as the Romans grew in power. By 300-100 B.C., they eventually became absorbed into the Roman empire.

Since their puzzling, non-Indo-European language was virtually extinguished (they left no literature to document their society), the Etruscans have long been considered one of antiquity's great enigmas.

Indeed, much of what we know about them comes from their cemeteries. Only the richly decorated tombs they left behind have provided clues to fully reconstruct their history.

Blocked by a perfectly sealed stone slab, the rock-cut tomb in Tarquinia appeared promising even before opening it.

Indeed, several objects, including jars, vases and even a grater, were found in the soil in front of the stone door, indicating that a funeral rite of an important person took place there.

As the heavy stone slab was removed, Mandolesi and his team were left breathless. In the small vaulted chamber, the complete skeleton of an individual was resting on a stone bed on the left. A spear lay along the body, while fibulae, or brooches, on the chest indicated that the individual, a man, was probably once dressed with a mantle.

At his feet stood a large bronze basin and a dish with food remains, while the stone table on the right might have contained the incinerated remains of another individual.

Decorated with a red strip, the upper part of the wall featured, along with several nails, a small hanging vase, which might have contained some ointment. A number of grave goods, which included large Greek Corinthian vases and precious ornaments, lay on the floor.

“That small vase has been hanging on the wall for 2,600 years. It’s amazing,” Lorenzo Benini, CEO of the company Kostelia, said.

Along with Pietro Del Grosso of the company Tecnozenith, Benini is the private investor who has largely contributed to the excavation.

Although intact, the tomb has suffered a small natural structural collapse, the effects of which are visible in some broken vases.

Mandolesi and his team believe the individual was a member of Tarquinia’s ruling family.

The underground chamber was found beside an imposing mound, the Queen Tomb, which is almost identical to an equally impressive mound, the King’s Tomb, 600 feet away.

About 130 feet in diameter, the Queen's Tomb is the largest among the more than 6,000 rock cut tombs (200 of them are painted) that make up the necropolis in Tarquinia. Mandolesi has been excavating it and its surrounding area for the past six years.

Both mounds date to the 7th century B.C., the Orientalizing period, so called due to the influence on the Etruscans from the Eastern Mediterranean.

According to Roman tradition, Demaratus, a Greek from Corinth, landed in Tarquinia as a refugee in the 7th century BC, bringing with him a team of painters and artisans who taught the local people new artistic techniques.

Demaratus then married an Etruscan noblewoman from Tarquinia, and their son, Lucumo, became the fifth king of Rome in 616 B.C., taking the name of Lucius Tarquinius Priscus.

The story emphasizes the importance of Tarquinia as one of the most powerful cities in the Etruscan league.

Indeed, the two imposing mounds would have certainly remarked the power of the princes of Tarquinia to anybody arriving from the sea.

NEWS: An Ancient Estruscan Home Emerges from a Hillside

According to Mandolesi, the fact that the newly discovered burial lies a few feet away from the Queen’s Tomb indicate that it belonged to one of the princes of Tarquinia, someone directly related to the owners of the Queen's Tomb.

“The entire area would have been off limits to anybody but the royal family,” Mandolesi said.

“In the next days we are going to catalogue all the objects. Further scientific tests will tell us more about the individual and the tomb,” Mandolesi said.

Discovery News will follow the archaeologists live as they remove the goods from the burial chamber.