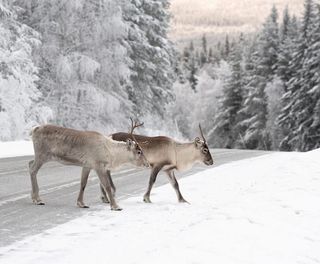 Recently, decision-makers in two of the nation's largest states gave the thumbs-up to critical policies for preventing the incidental death of wildlife.

If passed, one in California will help stop the random, mass-poisoning of wildlife by phasing out the dispersal of lead ammunition by sport hunters, and the other, in Florida, will help prevent the spread of a dangerous brain-eating disease called chronic wasting disease (CWD), which appears to be linked to captive deer-killing operations.

Earlier this month, the Florida Fish and Wildlife Conservation Commission, a powerful policy-making body with members appointed by the governor, passed an HSUS-backed rule prohibiting imports of deer and other cervids for stocking at game farms. The state has an estimated 300 deer farms where the animals are raised to be killed for meat and other body parts, and about a dozen captive-hunting facilities where deer are offered up as targets in captive hunts.

Colorado, Wisconsin, and 20 other states have tested and discovered deer and other cervids with CWD — a deadly, incurable brain-wasting illness similar to mad-cow disease. Since 2002, Wisconsin has spent at least $40 million to contain the disease, including engaging in mass slaughter of deer in certain parts of the state.

Chronic wasting disease can survive in the soil for years after it has separated from its mammalian host. Many outbreaks of CWD have been traced to captive cervids, and state wildlife managers are deeply concerned that these zombie deer will infect free-roaming deer, which are at the center of the states' multi-billion-dollar sport hunting programs. Eighteen states now have a complete ban on the importation of live cervids, and seven states have a partial ban. A number of Florida hunting groups, in addition to the Florida Veterinary Medical Association, supported the state-wide ban.

On the West Coast, Gov. Jerry Brown can make California the first state to phase out the use of lead ammunition for hunting by signing Assembly Bill 711. The HSUS, Audubon California and Defenders of Wildlife led the charge to pass this bill, introduced by Assembly members Anthony Rendon (D-Lakewood) and Dr. Richard Pan (D-Sacramento). The bill is based on hard data revealing that that more than 130 species, including endangered California condors, are vulnerable to poisoning by lead ammunition left behind by hunters, either in the entrails of animals that are shot or simply dispersed on the ground. One study puts the nationwide lead-related death toll for mourning doves — alone — to be more than 10 million birds. It's a staggering collateral toll.

Chuck Bonham, the director of the California Department of Fish and Wildlife, backed the bill, along with a number of rank-and-file hunters. All of the state's major hunting groups, however, opposed the bill, even though non-toxic forms of ammunition are available, affordable and in use. In fact, waterfowl hunters made the switch to non-toxic shot more than two decades ago.

Committed conservationists and animal-welfare advocates know it is wrong to allow random poisoning of wildlife. It is inimical to any sound principle of wildlife management. Bullets should not keep killing long after they've left the barrel of a firearm.

Pacelle's most recent Op-Ed was "Dogs to Prairie Dogs, Animals Need Rescue from Disaster" This article was adapted from "States Take Steps to Prevent Zombie Deer and Poisoned Condors," which first appeared on the HSUS blog A Humane Nation. The views expressed are those of the author and do not necessarily reflect the views of the publisher. This version of the article was originally published on LiveScience.