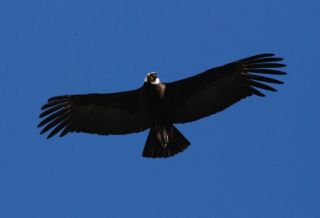 A bill has been introduced to the Peruvian Congress that would protect Andean condors, a huge species of raptor that is in decline and in danger of dying out in some parts of its territory.

Backers of the bill would like to do away with an Andean ritual in which condors are strapped to the backs of raging bulls, which conservationists say hurts and kills the birds, according to Andean Air Mail & Peruvian Times, a regional news website. The law would declare the birds a "national treasure" and implement jail sentences for anybody who hurts or kills one.

Andean condors are some of the largest birds on Earth, with 10-foot (3 meter) wingspans. They can fly up to 100 miles (160 kilometers) in a single day, and they feed on the remains of dead animals like cattle and other large mammals. The birds inhabit the Andes Mountains, ranging as far north as Colombia and south to Patagonia. There are approximately 10,000 condors left, and they are classified as "near threatened" by the International Union for Conservation of Nature.

The bill targets a ritual called the "yawar" festival, in which a condor, representing indigenous people, is tied to the back of a wild bull, representing colonists, according to Reuters. The clawing of the bird enrages the bull; townspeople then take turns running in front of the angry bovine. It's unclear exactly how the ritual affects the birds, according to the news service, although some scientists say it leaves the condors too traumatized or injured to survive.

There are probably no more than 500 condors in Peru, and the population is in decline, according to the Peruvian Times. The bird's population takes a while to grow since the animals are long-lived and reproduce infrequently. The bill would lead to a captive breeding program for the condors, according to the Times.

The Andean peoples have held Condors sacred for thousands of years. A 445-foot (135 m) depiction of a condor is one of the best known Nazca Lines, the geoglyphs mysteriously carved into the Peruvian desert more than 1,500 years ago, according to Reuters. Quechua-speaking communities throughout the Andes consider the bird sacred.

The bill was sponsored by Peruvians who live near Colca Canyon, a popular tourist destination twice as deep as the Grand Canyon, now home to just 25 condors, a fraction of those seen in years past, Reuters reports. The Colca Canyon Provincial Mayor Elmer Cáceres said his province slaughters donkeys every week and leaves them as food for the condors, according to the Peruvian Times.

He told that site that some 80 percent of the region's visitors come to see the birds, and asked Peruvian supporters of the legislative initiative to visit theprovince's website and sign a petition to save the condor. It's too early to say if, or when, the bill might be passed, according to reports.