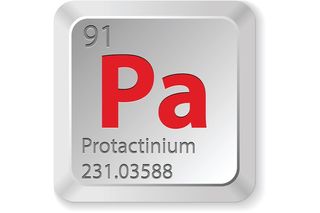 Word Origin: The word protactinium comes from the Greek protos, meaning first, and actinium. In effect, it means “parent of actinium” because actinium is a decay product of protactinium’s radioactive decay.

Discovery: The existence of protactinium was predicted in 1871 by Dmitri Mendeleev. Discovery of the element is attributed to Otto Hahn and Lise Meitner, who discovered another isotope of protactinium, 231Pa in 1917. The element wasn’t isolated until 1934, by Aristid von Grosse.

As a metal, protactinium is dense and silvery-gray with a bright metallic luster, which it retains for some time in air. It is superconductive below 1.4 K (minus 457.2 F). It readily reacts with oxygen, water vapor, and inorganic acids to form various compounds. Some of the compounds are colored. [See Periodic Table of the Elements]

When in compound form, protactinium is most stable in oxidation state +5, though it also exists in +4, +3 and +2 oxidation states. In solution the +5 state, it rapidly hydrolyzes by combining with hydroxide ions to form soluble or insoluble hydroxy-oxide solids. These solids tend to stick to the surfaces of vessels in which they are contained.

The element is a dangerous highly radioactive alpha emitter (5.0 MeV) and requires precautions similar to those used when handling plutonium.

One of the rarest naturally occurring elements, protactinium occurs in Earth’s crust in average concentrations of a few parts per trillion. This rarity makes it one of the most expensive natural elements.

It may be found in somewhat greater numbers of a few parts per million in some uraninite ore deposits, and in pitchblende at about one part 231Pa to 10 million parts of ore. Ores from Zaire have about 3 ppm.

In 1959 and 1961, the Great Britain Atomic Energy Authority extracted 125 grams of 99.9 percent protactinium. It was extracted from 60 tons of waste material and cost about $500,000. That was the world’s only stock of the mental for many subsequent years. Currently, protactinium is usually extracted from used nuclear fuel.

Due to its scarcity, high toxicity, and high radioactivity, protactinium has no current practical uses other than basic scientific research.

Protactinium has 29 radioisotopes. Almost all naturally occurring protactinium is 231Pa. It has a half-life of 32,700 years and is an alpha emitter formed by the decay of 235U. Other uranium decays produce isotopes of protactinium. Nearly all uranium-238 (99.8 percent) decays first to the 234mPa isomer and then to 234Pa.