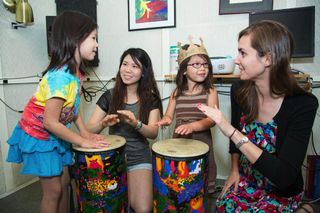 The ability to keep a beat influences how the brain responds to speech.
(Image: © Photo courtesy of Dr. Nina Kraus.)

People who can keep a rhythm well have more consistent brain responses to speech, a new study finds.

The ability of adolescents to keep a beat was mirrored in their brain activity while they were hearing spoken sounds, the research showed. The findings hint that musical training could improve mental skills involved in language.

Rhythm is a critical feature in both music and speech, said study researcher Nina Kraus, a neuroscientist at Northwestern University in Evanston, Ill. [10 Ways to Keep Your Mind Sharp ]

To find out, they tested a group of 124 Chicago high-school students, most of whom had no musical training. In one task, the teenagers tapped their fingers in time with a drumbeat, and the accuracy of their tapping was measured. In another task, researchers recorded the teens' brainwaves using electroencephalography (EEG) — electrodes on the scalp — while the participants listened to a speech synthesizer repeating a "da" sound (a common sound in speech).

"This study adds another piece to the puzzle in the emerging story suggesting that musical rhythmic abilities are correlated with improved performance in nonmusic areas, particularly language," neuroscientist John Iversen of the University of California, San Diego, who was not involved with the study, said in a statement.

Kraus and her colleagues are currently conducting longitudinal studies of kids in Chicago public schools and gang-reduction zones in Los Angeles to see how community-based music programs may impact neural learning.

The study was detailed today (Sept. 17) in the Journal of Neuroscience.